What if people had gills? 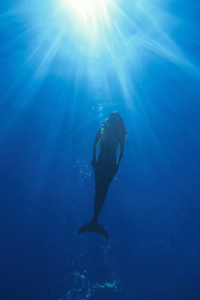 For this mermaid to actually breathe underwater, she would need more gills than what her fins could provide.
David Fleetham/Taxi/Getty Images

In the movie "WaterWorld," Kevin Costner's character has a mutation that gives him gills behind the ears. Is this really possible? Could a mutation allow people to swim in the water just like fish, without having to use any sort of scuba equipment?

One way to answer that question would be to look at evolution's record on the topic. Every time evolution has put a mammal in the water, whether it's a whale, a porpoise, a walrus or a manatee, evolution always does it with lungs rather than gills. Evolution often does drastic things to rearrange the rest of the body around the lungs -- for example, putting blowholes way back on top of the head in the case of whales, but evolution has never resorted to mammals with gills.

Why is that? The main reason lies in the fact that a mammal's gills would have to be gigantic. Gills work for fish because fish, being cold-blooded, don't need that much oxygen. A typical warm-blooded human being might require 15 times more oxygen per pound of body weight than a cold-blooded fish. When swimming, a human being would require even more oxygen than normal. Fish also use their mouths and gill flaps to move large amounts of water through their gills. Sharks and some other fish have to move constantly through the water so that enough water flows over their gills.

Think about how much of a fish's head is consumed by gills. Now imagine a human being with something like 15 times more room devoted to gills and some sort of system to force water over the gill surface. This is why you never see mammals with gills.

Video Gallery: Creatures of the Sea

Watch this TED video featuring David Gallo, a leading ocean explorer, as he discusses some of the coolest underwater sea creatures. See how the shape-shifting cuttlefish works, as well as bioluminescent fish that can light up the ocean depths.

'Man Flu' Could Be a Real Thing
Without a Hippocampus, Your Long-term Memory Is History
Is sitting too close to the TV really bad for your eyes?