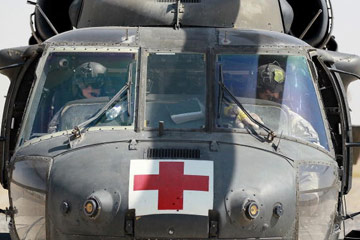 What does an Army flight medic do? As combat operations have escalated near Kandahar, Afghanistan, the 101st Airborne medevac unit transports casualties of war as well as sick and injured local residents.
Justin Sullivan/Getty Images

A helicopter marked with a red cross hovers over a battlefield. The pilot spots the target and swoops in for a landing. A medic rushes out of the chopper, heading for the injured soldier. The medic quickly assesses the situation and gets the patient into the air ambulance. He hops into the chopper and the aircraft lifts off, headed to the nearest medical center. On board, the flight medic continues administering medical treatment to the soldier, providing emergency care that could be the difference in whether the soldier lives or dies. Within minutes, the helicopter lands again, and the soldier is taken into the hospital for life-saving treatment.

Army flight medics may mean life or death to a soldier who's been injured, which is why they uphold their motto, "To provide qualified combat medics trained to treat, stabilize, and provide inflight medical care to the critically injured or ill while being transported aboard air ambulances during peacetime and combat operations" [source: USASAM].

Army flight medics are part of medevac (medical evacuation) operations. These operations use helicopters as air ambulances, transporting injured soldiers to medical centers where they can get further treatment. Although helicopters were used in this manner in the 1940s, the medevac program was officially established in the 1960s during operations in Southeast Asia. In Vietnam, the 57th Medical Detachment was the first medevac unit -- its name, "DUSTOFF," arose from its radio call signal.

An Army flight medic's duties run the gamut of emergency medical care and include the following:

In other words, an Army flight medic is much like an emergency medical technician (EMT) in a civilian ambulance. A flight medic just does his job in a helicopter -- and in potentially dangerous battle situations.

Army flight medics fall under the Military Occupational Specialty (MOS) known as 68W, or health care specialist/combat medic. These combat medics are assigned to platoons and provide initial medical care in case of emergency. When a soldier needs to be airlifted for further treatment, the combat medic calls in the medevac unit, and the flight medics -- 68Ws with skill identifier F6 (flight medics) -- continue providing emergency care.

A soldier can't just enlist in the Army and immediately become a flight medic. Read on and learn about a flight medic's specialized training.

A new enlistee can't become a flight medic immediately upon entering the Army. First, the active duty soldier must earn the rank of specialist, corporal or sergeant. National Guard or Reservist staff sergeants may also be flight medics. Students who don't have 20/20 vision must wear corrective glasses, not contact lenses. Other requirements for flight medic applicants include:

Flight medics learn their skills at the U.S. Army School of Aviation Medicine in Fort Rucker, Ala., although in wartime, it's not uncommon for a combat medic to learn flight medic skills through on-the-job training [source: Bearl]. To become a flight medic, a soldier must go through four weeks of training, which is broken down into two phases:

The course finishes with a situational training exercise that allows students to practice the skills they've learned. Throughout the course, students also participate in physical training, including practice in water survival.

Like combat medics, flight medics need to know emergency medical procedures necessary for treating trauma in both adults and children. Additionally, flight medics need to learn the different types of aircraft systems and medical equipment used in medevac operations. They learn basic aviation skills and how to be part of an aircrew. They learn how to safely load a patient into an aircraft, including hoisting patients should the aircraft not be able to land.

Once soldiers pass the course and earn their wings as flight medics, they're assigned to a medevac unit and begin their new careers.

Read on for more information about Army flight medics.