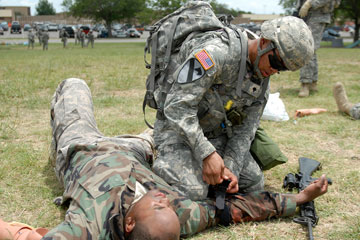 Army combat medics have to be prepared to administer to patients on the battlefield. Here, a medic practices applying a tourniquet to a soldier at Fort Hood in Texas.
Photo Courtesy of U.S. Army

You've probably heard the term "medic" on TV or at the movies: Something terrible happens on a battlefield, and as the smoke begins to clear and the troops retaliate, you hear soldiers calling "Medic!" while standing over the wounded. But what is an Army medic, and what does he or she do? You might assume that the "medic" in "army medic" is simply shorthand for a doctor or nurse -- part of the medical staff -- but medic is actually an official job within the U.S. Army with a Military Occupation Specialty (MOS) listing. A medic is not a nurse or a physician, but a health care specialist trained to give basic medical treatment and take care of soldiers in emergency situations.

Napoleon Bonaparte created the first official field medical team back in 1809 in response to pressure from his army's chief surgeon. More than 200 years later, field medics are an integral part of almost any platoon that's likely to see combat. A combat medic in the U.S. Army is designated MOS 68W and undergoes 25 weeks of training -- 9 weeks in basic training plus 16 weeks of specialized training. The curriculum includes basic Emergency Medical Treatment (EMT) training, which is similar to training for a medical assistant or physician's assistant.

Training to be an Army medic goes beyond just basic medical training, though. Since these medical personnel are going to be working in high stress situations, combat medics need to show that they can perform their duties in the heat of battle. Before completing the 68W specialization, they go through extensive field training where they practice performing their duties in simulated combat situations.

So when all of this training is done, what's it really like to be an Army medic? What are the main duties of a medic who's providing medical care for soldiers in the field? Read on to learn more.

For more information on life and jobs in the Army, check out the links on the next page.

Are Army medics and doctors on the front lines?
What is the role of a senior medic in the Army?
What exactly is an Army flight medic?