Do people without primary care doctors go to the ER more? 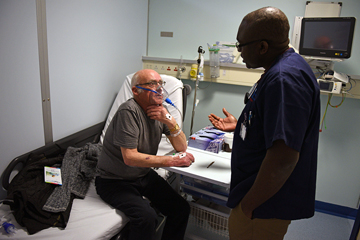 If you don't have a primary care doctor, does every issue become an "emergency"?
Oli Scarff/Getty Images

Most of us think of the ER as a location of last resort. We wouldn't head to the local emergency department for, say, a bout with strep or a mild rash. Those illnesses, we figure, are best left to primary care doctors — family medicine or general practitioners — whose waiting rooms aren't filled with more serious conditions like diabetic seizures or trauma victims. It seems like a good deal for everyone if patients aren't clogging ERs with non-life-threatening emergencies, and even when your situation isn't urgent, you're probably not eager to wait five hours for a doc to see you for 10 minutes and give you a prescription antibiotic.

This presupposes, of course, that all of us have primary care doctors we can simply pick up the phone and make an appointment with. Not so, by a long shot. In fact, the National Association of Community Health Centers estimates that 62 million Americans either don't have access or don't have reliable access to primary care because of a shortage of primary care physicians [source: Ritchie]. While the Affordable Care Act might be putting insurance cards in our hands, it could also be sending a lot of us to the only medical treatment facility we have access to: the emergency room.

How do we know that? One study in the journal Science showed that Medicaid coverage significantly increased emergency room visits by 40 percent over those without insurance, including diagnoses and treatment normally associated with primary care [source: Taubman et al.]. So it does seem that if you have insurance and no stable primary care provider, you're statistically more likely to go to the emergency room for medical treatment.

That's probably not entirely welcome news to those who are pushing insurance coverage to help lower crowding in the emergency room, and other longer-term studies do point to a downtick of ER usage from insured patients over time [source: Miller]. But we can't entirely trace the problem to folks simply not understanding what the emergency department is used for.

As we pointed out earlier, there's often a disconnect between primary care demand and availability. While general practitioners formerly made up half the population of physicians in the United States in the 1960s, there's been a steep drop since [source: AAFP]. Now less than a third are specialists in primary care [source: AHRQ].

This essentially means that as increasingly more Americans have access to health care, fewer primary care physicians are available as a first line of defense for information and treatment. That might just leave folks wandering into the ER for routine treatments or non-emergent conditions.

10 Conditions the ER Can't Help You With
10 Tips to Get You Through a Trip to the ER
What's the busiest ER in the United States?