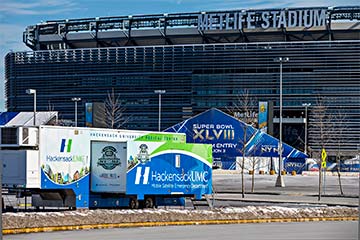 Remember when we used to be tethered to phones with those annoying cords, forced to change channels manually and actually visit the doctor's office? O.K, so we still need to do the latter quite a lot, but times are a-changing, thanks to the way that the medical industry constantly evolves to meet patient needs. In a world where convenience is certainly the name of the game, everything seems to be either wireless or on wheels. Mobile medicine has jumped on this bandwagon with great fervor in two ways. Patients can connect with doctors via portable medical facilities, which can be set up as needed, or use the Internet to talk with a health care provider.

Mobile medicine is designed to meet the needs of people who can't or don't like traveling to the doctor. From a prevention perspective, getting people in touch with primary care physicians and specialists is more important than ever. Stopping problems before they start or spotting them in their earliest stages can dramatically impact longevity and quality of life. Nearly half of adults suffer from some type of chronic disease, with seven out of 10 American deaths each year blamed on illnesses such as cancer or heart disease, which often can be managed or treated successfully if caught early enough [source: CDC].

For many people, gaining access to checkups or screenings is easier said than done. Some are uninsured, lack transportation or live in rural or impoverished communities. Others are simply too busy to schedule time to take care of themselves. Enter mobile medicine, which is designed to take any speck of inconvenience from the picture, showing up on your doorstep (or at least pretty close by). These services, apps and other tech offerings are embraced by many companies and insurance plans that recognize the long-term potential benefits of wellness checkups, screenings and prompt attention in emergency situations.

Are you intrigued, but not totally clear about the whole concept of mobile health care? Keep reading to learn more about the ways you can take advantage of this emerging industry. 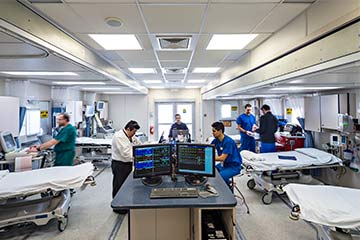 Mobile emergency rooms are the rock stars of the mobile medicine niche. Conventional emergency rooms (ERs) are often crowded, less than efficient and rarely conveniently located. Ultra-equipped mobile ERs gained favor following disasters like 9/11 and Hurricane Katrina, which produced so many patients that local hospitals became overwhelmed. Sort of like an ambulance on steroids, sprawling mobile ERs can usually handle anything from an ankle sprain to a surgical event. In situations where every second matters, mobile ERs can impact patient outcomes because they can be quickly set up at an emergency site to treat patients in all stages of distress. These ERs could assist with patient care after, for example, terrorist attacks, school shootings, hurricanes, tornadoes or earthquakes.

Hackensack University Medical Center in New Jersey received millions in federal funding in 2007 to develop a mobile satellite emergency department, through a partnership with the U.S. Department of Defense and the Urban Areas Security Initiative. Featuring all the bells and whistles an ER doc could hope for, it boasts a 15-vehicle fleet with two 43-foot (13-meter) trailers and a 48-foot (15-meter) trailer with expandable sides. Other trucks are used to connect the mobile ER and even produce oxygen. Within this compound are seven critical care beds, an operating room, a portable field laboratory, digital X-ray and sonography systems and a pharmaceutical cache, among other features [sources: Crees, HackensackUMC].

The fleet has been used to provide support after Superstorm Sandy and to assist other hospital systems in New Jersey when their ERs have experienced high numbers of patients. The mobile emergency department even had a presence at the 2014 Super Bowl, so fans dealing with minor injuries or cold weather-related illnesses could seek treatment on-site, then hustle back to the game [source: HackensackUMC].

The Hackensack unit cost around $1.7 million to build (not including medical equipment) and $6,000 per day when operating, according to Joseph Feldman M.D., F.A.C.E.P., chairman of Emergency Services at HackensackUMC. The figure does not include staffing costs. As of 2015, there are just a few mobile ERs in the U.S. [source: HackensackUMC].

So, is it worth the cost? Dr. Feldman thinks so. "We've really proven that a system that's mobile, that's easy and quick to get out the door can make a difference in patients and family lives in a manmade or natural disaster," he says. "As we move forward, more people in areas with extreme weather or with their own medical issues worldwide will see this as being a solution to a particular type of problem."

But mobile ERs are just one of the newer options. Let's look at mobile solutions to other ailments.

Other Types of Medicine on Wheels 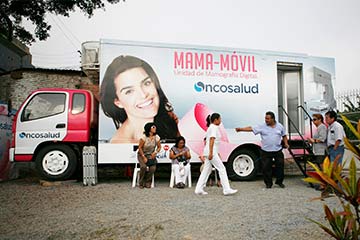 House calls may be so 1950s, but make no mistake about it -- some medical professionals are hardly bound to their desks and exam rooms anymore. For example:

Dentists: We're supposed to visit the dentist for cleanings twice a year, but for some people that's a pipe dream. More mobile dentists are popping up, particularly those designed to serve populations that have a hard time getting dental care, like low-income communities, children and the elderly. They'll actually set up shop in parking lots, schools, churches, nursing homes and other public venues to provide a full dental experience to those in need [sources: Apple Tree Dental, Smile Programs]. That's something to smile about!

Prenatal Care: Mothers-to-be and their babies deserve the best, but some get little to no prenatal care. A 2010 study of women in similar demographic categories found that those who used mobile prenatal services had fewer preterm births and low-birth-weight infants than those who did not have access to such care [source: O'Connell et al.].

Mammograms: Mammograms after age 40 are generally covered by insurance and highly encouraged, since breast cancer is vastly easier to treat when caught in early stages. Many hospital systems operate mobile mammography units, like the James Graham Brown Cancer Center in Kentucky, so they're easy enough to find if you keep your eyes open or do a quick web search. Some larger employers actually arrange for on-site mammograms, often as part of breast cancer awareness initiatives.

Cardiology: Rural hospitals often have limited cardiology capabilities. Rather than put a patient through the trauma of transfer, it's sometimes easier to bring the goods to them. Oklahoma State University Medical Center is one such rolling cardiology unit, providing smaller hospitals with the benefits of their portable testing services that can literally save lives.

General Health Screenings: Rolling clinics, like the one offered at Saint Joseph Regional Medical Center in Indiana, are ideal for people who need a basic checkup, but don't have the means to get to a physician's office. Employers that encourage wellness checks also sometimes bring the clinics on-site, so that employees spend less effort to keep an eye on their overall health – and less time out of the office.

Mobile Medicine in the Tech World

The concept of mobility used to just be about going places, but has really evolved into being equally about doing whatever you need to do, from the most convenient location.

Huge strides have been made in the area of telemedicine, by which patients can electronically connect with doctors and specialists via computer, smartphone, email and other such avenues. This is particularly useful for patients in rural areas that typically lack access to specialized medicine, and makes it easier for doctors to review test results, scans and other data in real time. Telemedicine is also helpful for people receiving home health care because it allows data to be transmitted from patient to doctor or nurse for ongoing review; this is called remote patient monitoring [source: American Telemedicine Association].

Apps are also breaking new ground in the mobile medicine arena every day, offering video chats with doctors (for a fee), physician locator/referrals, symptom checkers, insurance coverage information and just about anything else you can imagine [source: Huffington Post]. In addition, some smartphones are now being outfitted with the ability to take basic vital signs, such as blood pressure, heart rate, temperature and blood oxygen [source: Whiteman]. And smartphone attachments that can detect ear infections or analyze skin lesions, and send the images to your doctor are becoming available as well [source: Swanson]. "They're not just gadgets for the sake of gadgets, but gadgets to improve outcomes and efficiency," says Dr. Feldman.

As technology and innovation continue to explode, so does the potential for mobile medicine. A Dutch college student has developed an emergency drone (a small, unmanned plane), which can travel at about 62 miles (100 kilometers) per hour to deliver a defibrillator to treat people suffering cardiac emergencies. The early minutes of cardiac arrest are critical to survival, and many people don't live to see an ambulance arrives. The project is still in its infancy, but even if it never turns into reality, it is a great illustration of how to improve available medical equipment through technology [source: McFarland]. In other words, moving onward and upward (literally, in the case of drones) will keep medicine functioning at its finest.

Medicine never ceases to amaze me, and mobile health care is no exception. Although I do love and admire the idea of an emergency drone, I fear the day that my kids figure out how to summon one. Pretty sure that we'll be deep trouble!

Do ER doctors work for the hospital or for themselves?
What constitutes a medical emergency?
What's the busiest ER in the United States?