Precautions and Side Effects 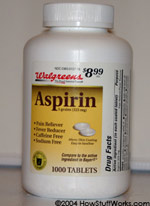 Just like all medicines, aspirin isn't all good. It has effects on the body that you and your doctor don't want (side effects). Some of them have already been mentioned; for example, if you hit your finger with a hammer and it's bleeding, an aspirin may help the pain and swelling, but the wound may take longer to clot and stop bleeding. Also, it can be very upsetting to the stomach, especially at the high doses often used in arthritis.

Aspirin also isn't used as much for fevers in children since research has suggested that aspirin given to kids with flu, chicken pox, or other viral sicknesses may cause a potentially deadly problem called Reye syndrome.

Aspirin also changes the way your kidneys make urine, can cause some people to have trouble breathing (rarely), and can be dangerous at very high doses.

For these reasons, chemists have found other chemicals closely related to aspirin that have some of its good effects and lack some of its bad effects. For example, ibuprofen and naproxen (or Motrin and Naprosyn, respectively) also treat pain, swelling and fever, but they seem to have less of an effect on platelets than aspirin does. These medicines are called the non-steroidal antiinflammatory drugs (NSAIDs) because they decrease swelling but they aren't steroids, which are the most potent antiinflammatory chemicals we have. Another family of medicines related to aspirin includes acetaminophen (or Tylenol), which decreases fevers and pain, but it doesn't affect either swelling or your stomach as much as the true NSAIDs do.

Felix Hoffmann was sure that aspirin would make a good drug for arthritis. But as he struggled to prove it to his cautious employer, how could he have known it would save lives, and in so many ways? So the next time you get out the hammer, think of Felix and set aside an aspirin or two. He deserves the tribute, and it's best to be prepared for hitting the wrong nail.

For more information on aspirin and related topics, check out the links below.

About the Author Dr. Lucas Hoffman ("please call me Luke") is a resident in Pediatrics at the University of Washington in Seattle. He was raised in New Mexico, and he went to college at the University of California at Berkeley. He then attended medical school and graduate school at the University of California in San Francisco, where he worked on designing inhibitors of viruses like influenza and HIV. He now lives with his wife Ellen, a science journalist (whose work can be seen at the site http://faculty.washington.edu/chudler/neurok.html), and his dog Talisker, an occasional headache, in Seattle.