by Jennifer Pocock
NEXT PAGE

You're sitting at work, preparing notes for the morning meeting, when you gradually begin to notice white, jagged lights flickering at the edge of your vision. The left side of your face goes numb, and so do your hands. Your head suddenly seems swollen to three times its size. You know that you're about to get yet another migraine. Hours later, your meeting is going on without you, and you are in the bathroom battling skull-crushing pain and nausea, and you're unable to see out of one eye. It feels as though someone's taken one of those cartoon sledgehammers to your head, except not nearly as funny. The next day, a co-worker makes fun of you for missing work because of a headache.

Migraines are debilitating conditions that affect the lives of between 12 and 24 million Americans (18 percent of women and 6 percent of men), and remain grossly underdiagnosed. They are anything but your normal tension or sinus headaches, lasting anywhere from several hours to several days and in some reported cases, months or even years. Migraines are often accompanied by symptoms such as loss of vision, vomiting, tremors and stroke-like symptoms such as numbness to parts of the body. Migraine headache pain usually focuses on one side of the skull, though for some it can happen on both. Many people say that their migraines switch sides of the head.

Amazingly, doctors are still not entirely sure exactly how someone gets a migraine or why certain things set them off (or trigger them). Previously, they believed that it was caused by blood vessels dilating. While this could be a contributor to pain and the cause of an aura (lines, colors, zigzag patterns or blind spots visible prior to migraine pain), doctors no longer believe this to be the underlying problem. Newer evidence suggests that other factors, such as the release of chemicals and increased sensitivity to pain, occur at the same time, which is the actual cause of most migraine pain. Most recently, doctors have classified migraine as a neurobiological condition, or one that originates in the brain.

Could food trigger my migraines? 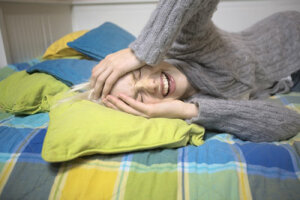