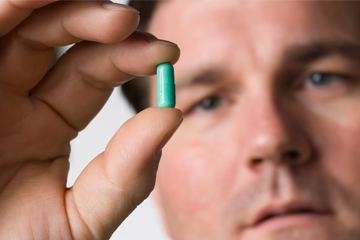 Most of the side effects of antibiotics on the eyes are minor and temporary but a few can cause permanent damage.
Gabe Palmer/ThinkStock

All antibiotics come with a long list of side-effect warnings, most of which are either very rare or fairly minor. These side effects can affect any part of the body, from the skin to the central nervous system. Your eyes are no exception − plenty of antibiotics can have vision-related side effects. Most are temporary (redness, itchiness, dryness), but some can permanently damage your vision.

The U.S. Food & Drug Administration (FDA) issues boxed warnings for the drugs that have severe potential side effects, the ones that doctors have to consider very carefully before prescribing. They should be used only when the potential benefits of the drug outweigh the risk of the side effects − in other words, as a last resort. When it comes to serious vision-related side effects, the class of antibiotics called fluoroquinolones gets a lot of boxed warnings.

There are nine fluoroquinolones available on the U.S. market, one of which (Levaquin) was the top-selling antibiotic in 2010 [source: Brody]. Other common fluoroquinolones subcategories include ciprofloxacin (otherwise known by the brand-names Cipro, Zoxan and Proquin), levofloxacine (Levaquin, Cravit) and moxifloxacin (Avelox). You might have a question at this point in the proceedings: If drugs with boxed warnings are supposed to be used with caution, why are fluoroquinolones the most popular antibiotics in the country? The answer is a common one in the world of antibiotics: overprescription. The Centers for Disease Control and Prevention has urged doctors to stop prescribing fluoroquinolone except in the direst cases, saying that overprescription has greatly increased antibiotic resistance and the occurrence of these severe vision-related side effects.

Retinal detachment is the most common visual side effect of fluoroquinolones. It's still rare, but one study found that people who took fluoroquinolones had a five times greater risk of developing it [source: Etminan]. Retinal detachment is reversible with surgery but can cause permanent vision loss if it isn't caught quickly. There's also a risk of retinal hemorrhage, which can also irreversibly damage sight in severe cases if not treated immediately.

It's not quite clear why fluoroquinolones can be so destructive to the eyes. They clearly cause damage to the collagen and connective tissue inside the eye, but researchers aren't sure exactly how. The threat of these complications increases with age, and they're associated with the oral and injected forms of the drug, not the topical medications.

A few other antibiotic classes have been known to cause minor eye reactions. Penicillins (namely amoxicillin and ampicillin) and tetracyclines are sometimes linked to redness, itchiness and dryness. Ethambutol and isoniazid, two tuberculosis medications, can trigger optic nerve issues that cause blurriness and problems with seeing colors. Most of these reactions are temporary and disappear after discontinuation of the antibiotic.

You Need It Like a Hole in the Head: The Ancient Medical Art of Trepanation
Viagra May Help Prevent Colorectal Cancer
Why can some medicines be taken as pills, while other medicines have to be injected with a needle?