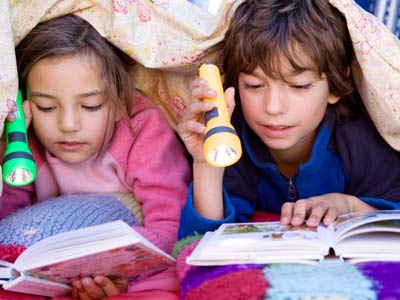 There are many nights in a young child's life when bedtime comes far too early. Sleep seems like a distant possibility, yet parents insist that the child remain in bed with the lights off. In this situation, many children have resorted to reading under their covers by flashlight. The meager beams of light ensure that parental attention won't be aroused while providing the children with a chance to catch up with their favorite fictional characters, from girl detectives to boy wizards and talking animals.

Unfortunately, children engaging in this activity have frequently been caught by their snooping parents. And not only is there a potential punishment in store for staying up past lights out, children are also issued the ominous warning that their dimly lit reading will ruin their eyes. This scenario may represent one of the few times in which children aren't praised for their diligent reading habits.

Yet if these children are avid readers who've consumed a few tales of pioneer life, they may wonder if this threat holds true. After all, generations of people had only candlelight to read by, and they turned out just fine. Are today's parents just overprotective of our eyesight?

As it turns out, they probably are, but they're not the only ones. In 2007, the idea that reading in dim light ruins eyesight was named one of the seven medical myths that doctors are most likely to believe [source: Parker-Pope]. The study, published in the British Medical Journal, revealed that reading in low light does not damage eyes, but rather causes eye strain. Eye strain is no walk in the park, though. Find out more about this phenomenon on the next page. 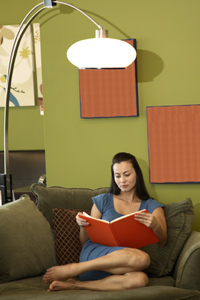 Please Stop Flushing Your Contacts!
Can holding in a sneeze kill you?
An Historic Sneeze, a Disgusting Sneeze Cloud