What can you do if you were mistreated in the ER? 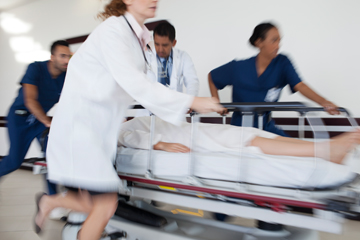 Say you've been in a car accident, or maybe one of your kids has some medical malady that requires a trip to the emergency room. While you're there, you or your child receives less-than-stellar treatment. Maybe you have to wait too long to see the doctor, and the injury or illness gets worse as a result. Maybe your child is given the wrong treatment for an injury, or maybe your symptoms are simply misdiagnosed.

What sort of recourse do you have? Is it the same as if you'd gone to your personal physician and received the same treatment? Can you sue the hospital, or do you just sue the doctor and the other medical personnel who treated you badly? Do you even have a case? Do you need an attorney? Is there anything else besides suing that you can do?

For example, say you go to the ER with a sore and swollen wrist. X-rays are taken, and the doctor looks at them, diagnoses a sprain, wraps your wrist and sends you home. After a couple of days, you're no better -- in fact, maybe you're a little worse. You go to your personal physician, who looks again at the x-rays and spots a hairline fracture that the ER doctor missed. The doctor puts you in a cast, and in a matter of weeks, you're healed -- good as new. While the ER doc may have been negligent in not seeing the fracture, the truth is that you haven't really suffered any damage. Your recovery may have taken a bit longer, but that's all. In all likelihood, you don't have a case.

Harm to the patient must exist for any medical malpractice allegation, but there are also other requirements. First, you must be able to show a formal doctor-patient relationship exists. You can't overhear some bit of medical advice given to another person in the ER, on the street or at a cocktail party and then sue the doctor after you apply the advice to yourself and something goes wrong. That doctor, whether encountered in an emergency room or at the gym, has no formal relationship with you. The fact that you followed his or her advice is all on you. The doctor may have been talking about ways to treat a completely different illness or injury.

Next, the doctor must have been negligent. Negligence is a legal standard that means your care was not "reasonably skillful and careful." In essence, it means that if another competent physician had looked at the medical facts of your case, he or she would have come to a different conclusion for diagnosis or treatment. This is most often proven with expert medical testimony [source: Boeschen].

Finally, the doctor's negligence must have caused damage -- which is closely related to the concept of harm mentioned earlier. However, damage can involve several other things beyond pain and suffering, including additional costs of treatment because of the additional injury, loss of earning capacity, loss of quality of life and even loss of life. Damages can be difficult to prove, however, if the person was already sick or injured when seeking help. This is another instance where expert medical witnesses are used -- on the patient's side -- to say that the doctor did, in fact, cause additional injury. But keep in mind that the doctor will also call experts to say that the underlying illness or injury caused the damage, rather than the doctor's negligence.

Those are the basics of medical malpractice. Now, let's take a look at how the standards can be different in the ER. Emergency rooms can be fairly chaotic places, with treatment decisions made quickly and often by doctors who aren't familiar with a patient's history. For these reasons, most states have laws granting a bit more leeway to ER doctors and nurses than to other medical professionals.

Patients must prove the same basis for malpractice in the ER as in other cases, such as the existence of a doctor-patient relationship, negligent treatment and harm or injury from the treatment.

The doctor-patient relationship can be established by a single encounter, such as what would occur in an ER. All that must be proven is that the injury or harm occurred during the ER visit with the doctor in question.

The second element, negligent treatment, is different from other claims of medical malpractice. In a medical malpractice suit, a patient must prove two things in order to win: what the accepted standard of care is, and that there was a breach of that standard. In an emergency room, where urgent treatment may have to be given to an unconscious or confused patient, the standard of care is more relaxed than it would be with a doctor who has time to get to know a patient, collect medical history and then consider and discuss with the patient all the available tests and possible ramifications of treatment.

The standard of care is generally presented by expert witnesses, often ER doctors themselves, who testify as to whether the treatment given was competent in the circumstances or if that standard was breached.

In an emergency, however, informed consent is not always possible. If you've been in an auto accident and arrive at the ER unconscious and with internal injuries, minutes matter. The doctors don't have time to explain the risks of the necessary surgery -- nor do you necessarily have the capacity to understand them. They haven't yet reached your next of kin, so they can't get informed consent. In this case, even if something goes wrong during the surgery, you or your family would not be able to use lack of informed consent as a basis for claiming malpractice.

Another option if you're mistreated in the emergency room is mediation or arbitration. This is similar to going to court, but it essentially involves coming to a mutual agreement without having to endure prolonged legal proceedings. Because the hospital and/or the medical professionals who mistreated you or your family member will have attorneys, you'd best be served by talking to one yourself.

The bottom line: If you or a loved one was mistreated in an emergency room, you have legal options, just like you would in any medical malpractice situation. It's the standards, though, may be a bit different. Talk to a lawyer if you believe you have been mistreated and wonder if you have a strong case.

Author's Note: What can you do if you were mistreated in the ER?

While I don't believe I've ever been mistreated specifically in the ER, I received poor treatment from a doctor many years ago, and have suffered mild repercussions ever since. I remember my parents talking about suing, but the doctor was killed in an accident before a decision could be made. It certainly wasn't the outcome any of us wanted, but I don't think I'd have wanted to sue either.

Smart Bandages Can Monitor, Treat Chronic Wounds
How Right to Try Bypasses the FDA
Should you use ice or heat to treat an injury?