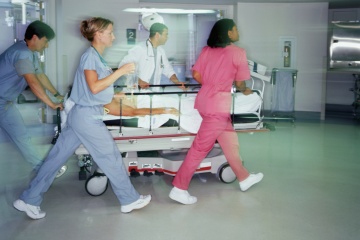 You better not get in the way of a bunch of emergency nurses in a hurry.
Chad Baker/Jason Reed/Ryan McVay/Photodisc/Thinkstock

"I need a crash cart here!" Long before this became a staple line of TV hospital dramas, there was a time when crash carts didn't exist. In those dark ages, medical personnel wasted precious time running around gathering up the necessary materials to care for critically ill patients. In 1968, a registered nurse (RN) in Buffalo, New York, finally had enough.

Anita Dorr had served as a U.S. Army nurse in both Europe and Africa during WWII and had risen to the rank of major. Having witnessed the effects of many of the infamous horrors of that conflict, including the concentration camps, she was committed to helping trauma victims as quickly and efficiently as possible.

Enlisting the aid of her husband, Dorr designed and built a small, red, wooden cart that had wheels, a laminated top, some shelves and a clipboard. She arranged materials on the top according to where on the patient's body they would be needed. Intubation items, for instance, were at the head, medications in the middle and intravenous materials at the foot. The invention, which was dubbed the "crisis cart," was an instant hit, and soon the entire hospital was full of them [source: Jezierski]. To control infection, the modern-day descendant of Dorr's cart is steel, not wood, and its supplies are disposable. But it still carries a clipboard!

Was Anita Dorr the inventor of the crash cart as we know it? She never obtained a patent, and others have laid claim to the title, but there's no doubt Dorr was among the first. And that was just one of her many accomplishments in the field of emergency nursing, a specialized discipline she helped create. Because once upon a time, there was no such thing as an official "emergency nurse." There wasn't even an emergency room!

A Brief History of Emergency Nursing 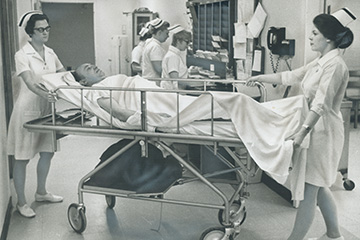 Hospitals didn't originally dedicate much space to emergency cases. You might've ended up in the hall if they didn't have room for you.
Harold Barkley/Toronto Star/Getty Images

In the early 1900s, if you went to the hospital and needed help fast, you might end up getting trundled through the building's hallways to a dingy room somewhere in the basement and nowhere near ambulance services. Fortunately, by the mid-20th century, hospitals were designing departments specifically to deal with emergency care.

One way or another, until the 1970s, no matter what kind of emergency department you ended up in, the person in charge was likely to be a nurse. That's because, in the early days, many large hospitals rotated unsupervised interns and resident physicians in and out of their emergency departments with the result that the only long-term staff among the medical professionals would be the nurses. That meant that it would be nurses — not the MDs — who guided the new physicians through their training [source: Schriver].

Anita Dorr, for example, rose to become supervisor and then director of the emergency department in her Buffalo, New York, hospital. Noting that her profession lacked both official recognition and standards as a sub-discipline of nursing, she co-founded the Emergency Department Nurses Association (EDNA) with Judy Kelleher in 1970 [source: Jezierski]. The EDNA (now called the Emergency Nurses Association, or ENA) began publishing the Journal of Emergency Nursing and created a series of certification courses.

Now, with more than 40,000 members in 35 countries, the ENA is one of the largest nursing associations in the world. The organization advocates on behalf of emergency nurses in addition to serving as a networking and teaching association. The ENA is also a pioneer in the world of e-learning, with more than 50,000 people taking its online courses. In fact, the online program is so innovative that Digitec Interactive named the association its 2014 Transformer of the Year [source: Digitec Interactive].

What Does it Take to Be an Emergency Nurse? 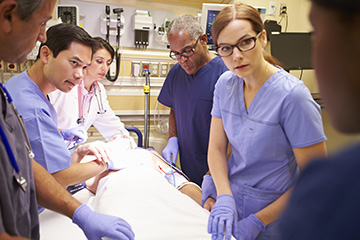 Keeping cool under pressure is key to a career in nursing.
monkeybusinessimages/iStock/Thinkstock

The key elements that differentiate emergency nursing from other specializations are the variety of duties and the pace of activity. At any given moment, an emergency nurse could be called on to help deal with every imaginable type of health issue from administering shots to delivering babies to reviving patients in cardiac arrest. And the pace of work can swing wildly, with quiet afternoons exploding into chaos in a matter of seconds.

Obviously, if you want to be an emergency nurse, you have to be the kind of person who thrives on variety and can keep a cool head when things go crazy. But you also have to be comfortable with lulls in the action while waiting for the flashing lights to arrive with the next crisis.

To become an emergency nurse, you have to start with a nursing degree. Once you're an RN, there's a possibility that you could be hired right away by a short-handed emergency department, but this won't be the smoothest path to follow. Before diving into the high-pressure discipline of emergency nursing, the ENA recommends spending some time in a different department honing basic nursing skills like how to prioritize duties, how to handle multiple patients at once and how to help with real-life resuscitation efforts. That said, some hospitals provide three- to six-month internship programs to prepare prospective emergency nurses for the job. The association also recommends working toward specialized credentials like the CEN (certified emergency nurse) or the CFRN (certified flight registered nurse). If you're already busy working as a nurse, each certification could take about two years [source: ENA].

As the "F" in CFRN implies, emergency nurses don't just work in hospitals. CFRNs are qualified to practice on planes and in helicopters. A CEN could also find employment at poison control centers, prisons, crisis intervention centers, in ambulances and in the military, to name just a few possibilities. And they can further specialize in sub-disciplines like pediatrics and psychiatry.

While good statistics for emergency-nurse incomes are hard to come by, all emergency nurses are RNs, and the U.S. Bureau of Labor Statistics reported that the average yearly income for RNs in 2013 was $68,910 [source: U.S. Department of Labor]. Having a CEN or other certification can mean earning even higher pay. 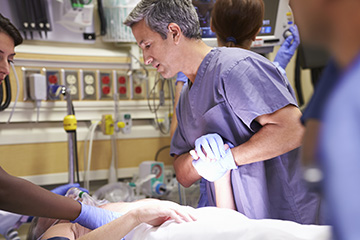 The regular trauma nurses face leaves them at risk for developing PTSD.
monkeybusinessimages/iStock/Thinkstock

In recent years, emergency departments have become increasingly important to the American health care system. They are now the primary diagnostic and resuscitation centers in most hospitals. As a result, emergency nurses are now required to master a greater quantity of information and a longer list of technical skills. They must also spend a considerable amount of time documenting their work in addition to performing clinical tasks [source: Schriver].

For their troubles, they get a lot of abuse. As many as 75 percent of emergency nurses deal with aggressive behavior and verbal abuse. That's more than twice the percentages for nurses in other fields [source: Adriaenssens].

Beyond all this, they are regularly exposed to others' trauma. Repetitive exposure to trauma can lead to post-traumatic stress disorder (PTSD), and recent studies have found that as many as 33 percent of emergency nurses suffer from PTSD, as opposed to only 14 percent of nurses in other departments. According to one study, the most difficult experience for nurses to deal with is the death of children. Helping crash victims and other casualties of extreme physical trauma also leaves its mark [source: Adriaenssens]. And because emergency nurses often have to deal with one trauma after another in rapid succession, they have no time to process or recover in between. Nurses suffering from PTSD can begin to experience nightmares, insomnia and depression, among other mental and emotional symptoms. And these symptoms can in turn lead to poor job performance, more sick days and general burnout.

With adequate preparation, emergency departments can help their nurses deal with PTSD by providing training in cognitive behavioral coping strategies and relaxation techniques. One of the most important elements in helping nurses recover from exposure to trauma is a good social support network within the department. This requires strong leadership from the head nurse, who can help establish a supportive atmosphere where PTSD is recognized as a reality that must be dealt with empathetically. In the end, those who deal best with PTSD are the same personality types best suited to emergency nursing: those who can speed up or slow down as needed, who are able to resist stress and multi-task easily, and above all, those who can stay calm in the midst of chaos. 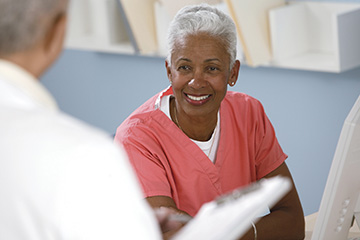 In 2001, a federal study predicted a nursing shortage by 2010 and a severe shortage by 2020. Nursing shortages occur on a cyclical basis, but the fear was that this time would be different and the shortfalls might be permanent. The authors outlined numerous contributing factors: increasing demand for nurses, an aging workforce, a wider variety of professional options for younger people and falling enrollment in nursing programs [source: Schriver].

While the nursing profession in particular, and the medical community in general, fretted about the looming crisis, prospective nurses saw opportunities — they certainly wouldn't have any difficulty getting hired, and they would be able to pick and choose the positions they wanted.

In 2005, psychologist Philip Tetlock demonstrated in his book "Expert Political Judgment" that, in general, when experts try to predict the future, their predictions tend to be wrong as often as they're right. This turned out to be the case with the feared nursing shortage. Instead of a shortfall, we have a glut. As of September 2014, there were 500,000 morenurses than we expected to have back in 2001 [source: Staiger et al.]. Why? For one thing, enrollment increased. Responding to the gloomy forecast, and anticipating easy employment, more students entered nursing programs — but not enough to explain the glut. The big reason was that older nurses weren't retiring as expected.

As many baby boomers turned 65, they just kept working. It turns out that this phenomenon isn't limited to the nursing profession; plenty of boomers aren't ready to close out their careers yet. With longer life expectancies and better health outlooks, many are choosing to keep on trucking. Some might be trying to augment their eventual retirement funds, while some might still be putting kids through college, and others might simply love their job too much to give it up.

But they will have to retire eventually, and with predictions that the available RN jobs will jump from 2.7 million in 2012 to 3.2 million in 2022, the numbers can't be fudged [source: U.S. Department of Labor]. There will be a nursing shortage in the coming years. It's not a question of if, just when.

In researching this article I came across the story of a New York City emergency nurse named Lindsey Hallen who was preparing to go to into the Ebola zone in Africa. Offered a last-minute choice between a post as a safety instructor in Liberia or a front-line position in Sierra Leone, she hesitated only briefly before choosing the more dangerous job. As her father remarked, she has the personality of a firefighter who runs into a burning building as everybody else runs out. Good thing such people exist.