by Isaac Perry Clements
NEXT PAGE 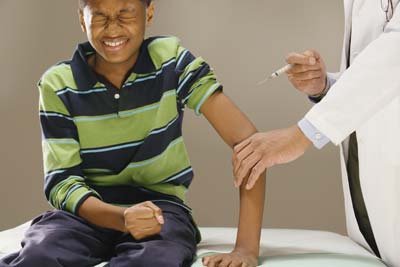 Getting an injection is never pleasant.
Paul Burns/Photodisc/Getty Images

What child doesn't experience fear and anxiety over the prospect of getting a shot at the doctor's office? Even for many adults, the experience of getting an injection isn't pleasant. Wouldn't it be nice if the nurse could forgo that needle-tipped syringe?

Or, think how convenient it would be for people who must manage complicated dosage schedules of medications to wear a specialized drug patch instead, which could automatically control the delivery of different drugs throughout the day.

Scenarios like these might soon become reality, thanks to a new device developed by Hewlett-Packard (HP). The device can be thought of as a computer-controlled drug patch -- similar to the look and feel of a nicotine patch (although this one is a little heavier). The patch can painlessly inject precise amounts of drugs into the body. The patch is based partly on HP's existing inkjet technology and partly on an emerging technology involving microneedles. The inkjet system controls the flow of drugs through the patch, and the microneedles, made of materials like silicon, metals, and biodegradable polymers, help transmit the drugs through the skin [source: Toon].

To understand the patch, let's first look at how microneedle technology works. Microneedle devices usually consist of hundreds or even thousands of tiny microscale needles, evenly spaced into an orderly array of rows and columns. (Imagine a bed of nails, only on a much smaller scale and far less scary.) Each microneedle is thinner than the diameter of a human hair and less than 0.1 millimeters in length -- just long enough to break through the outer layer of your skin. One microneedle alone could deliver only a small dosage of medication, but the whole array of microneedles could dispense a considerable amount.

So how are microneedle arrays able to inject drugs without causing pain? The answer lies in the length of each microneedle. Because each microneedle is so short, it penetrates through the outermost layer of your skin, called the stratum corneum, but doesn't reach your skin's pain receptors (located slightly deeper). Even if the microneedles do reach the pain receptors, the spacing and size of the needles prevents them from triggering pain signals. Their size also causes far less tissue damage than does a standard hypodermic needle.

Microneedles are a great way to get drugs into the body, but what does this have to do with inkjet technology? Keep reading to find out if a computer printer will administer your next flu shot.