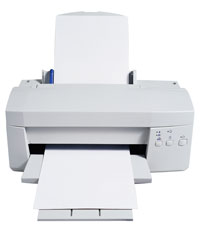 Is this the nurse of the future?
Ryan McVay/Photodisc/Getty Images

The inkjet portion of the drug-delivery patch precisely controls the flow of drugs through the microneedles -- in a way similar to how an inkjet printer head controls the flow of ink through its nozzles. In a thermal inkjet printer, each nozzle has its own reservoir of ink and also contains a resistive heating element. When a microprocessor sends electricity to each heating element, the ink around the element rapidly heats up and expands, expelling the specified amount of ink out of the nozzle. In the inkjet drug patch, a similar process is used to control the flow of drugs precisely through the tip of each microneedle and into the body.

And just as color printers can control the flow of more than one color of ink, inkjet drug delivery systems can be made to store and deliver many different drugs at once.

There are many advantages to using inkjet-technology dosage control. For example, it's important for drugs to be delivered in precise amounts. The microprocessor-controlled inkjet system is not only able to deliver exact dosages; it can automatically control a complex dosage schedule of multiple drugs. This capability could be especially valuable for children or for elderly patients who might have a hard time keeping track of their many scheduled medications. There's a wide range of other useful tasks that the device could potentially perform as well. For example, the microprocessor could be programmed to deliver drugs in response to a patient's vital signs, like blood pressure or body temperature [source: Kanellos].

An array of microneedles mounted atop an applicator.
Photo courtesy Harvinder Gill/Georgia Institute of Technology

While the inkjet drug delivery system is a breakthrough technology and has shown promising test results, it still has a long way to go before it can be used commercially. Just like all medical devices, it must be proven safe and effective by a series of tests overseen by the Food and Drug Administration. Another critical factor affecting the adoption of the device will be its cost. The electronic and microscale components of the inkjet system will likely be expensive to manufacture, although costs should go down with time.

So will inkjet technology replace hypodermic needles? The future is still unclear, but it looks like the answer might be yes for some applications. For example, in situations where automatic or precise dosages are important, like insulin for diabetic patients, the additional price of the inkjet technology might be tolerable. In other situations, microneedle array systems without the inkjet control might be a less costly alternative to conventional syringes.

Either way, it appears that the hypodermic needle's reign of terror is about to be challenged in a big way by micro-sized competition.

Dr. Mark Prausnitz, a professor at the Georgia Institute of Technology and microneedle expert working in Georgia Tech's Laboratory for Drug Delivery, has developed one-time-use microneedles made from a dissolvable polymer. Once pressed into the skin, the solid microneedles deliver embedded drugs as they dissolve harmlessly into the body. This design makes needle reuse impossible and eliminates some hazardous medical waste.