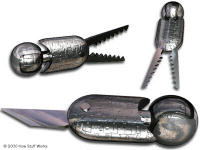 Types of instruments used by the da Vinci Surgical System

A product of the company Intuitive Surgical, the da Vinci Surgical System is perhaps the most famous robotic surgery apparatus in the world. It falls under the category of telesurgical devices, meaning a human directs the motions of the robot. In a way, this makes the robot a very expensive high-tech set of tools.

On July 11, 2000, the U.S. Food and Drug Administration (FDA) approved the da Vinci Surgical System for laparoscopic procedures, making it the first robotic system allowed in American operating rooms. The da Vinci uses technology­ that allows the human surgeon to get closer to the surgical site than human vision will allow, and work at a smaller scale than conventional surgery permits. The $1.5 million da Vinci system consists of two primary components:

In using da Vinci for surgery, a human surgeon makes three or four incisions (depending on the number of arms the model has) -- no larger than the diameter of a pencil -- in the patient's abdomen, which allows the surgeons to insert three or four stainless-steel rods. The robotic arms hold the rods in place. One of the rods has two endoscopic cameras inside it that provide a stereoscopic image, while the other rods have surgical instruments that are able to dissect and suture the tissue. Unlike in conventional surgery, the doctor does not touch these surgical instruments directly.

Sitting at the control console a few feet from the operating table, the surgeon looks into a viewfinder to examine the 3-D images being sent by the camera inside the patient. The images show the surgical site and the two or three surgical instruments mounted on the tips of the surgical rods. The surgeon uses joystick-like controls located underneath the screen to manipulate the surgical instruments. Each time the surgeon moves one of the joysticks, a computer sends an electronic signal to one of the instruments, which moves in sync with the movements of the surgeon's hands. Working together, surgeon and robot can perform complete surgical procedures without the need for large incisions. Once the surgery is complete, the surgeons remove the rods from the patient's body and close the incisions.

The final category of robotic surgery devices is the shared-control system. We'll learn more about this kind of robot on the next page.

Once upon a time, the Intuitive Surgical da Vinci System had competitors. A high-tech medical company called Computer Motion produced several robotic surgery devices, naming them after Greek myths, legends and scholars. Their most famous systems included Zeus, Aesop, Socrates and Hermes. In 2003, Intuitive Surgical merged with Computer Motion, incorporating many of its former competitor's designs into its own products.