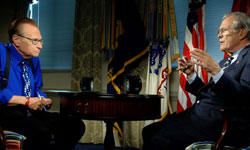 Larry King is probably best known for his long-running cable interview show, "Larry King Live," but the septuagenarian has been in show business since the 1950s. King began his career as a disc jockey in Miami, and began broadcasting nationally in 1978. "Larry King Live" has been on the air since 1985, and was the first worldwide call-in talk show on television. It is estimated that King has conducted more than 40,000 interviews over the course of his 50 years in broadcasting.

King's father died at the young age of 44 due to heart disease, which put King at high risk for developing the disease. He was also a heavy smoker and did not exercise or eat a healthy diet. In 1987, at the age of 54, King suffered a serious heart attack. Shortly afterward, he underwent quintuple bypass surgery. The experience led him to not only make serious changes in his own life, but also to help others with heart disease. King wrote two books on the subject: "Mr. King, You're having a Heart Attack" outlined his experiences, while "Taking on Heart Disease" focused on the experiences of other celebrities. King also started the Larry King Heart Foundation to help pay for cardiac surgeries for people who could not otherwise afford them.

Despite his lifestyle changes, in early 2010, 76-year-old King began experiencing pain that was the result of blocked arteries. This time, he had surgery to place tubes called stents in some of his coronary arteries. These stents push the plaque back against the arterial wall and allow for better blood flow.