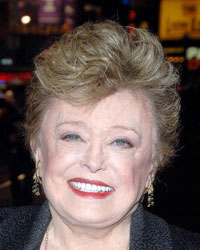 Rue McClanahan at the opening of a Broadway play in February 2009.
Joe Corrigan/Getty Images

Although many people think of breast cancer as the number-one killer of women, heart disease gets that ignoble distinction. Actress Rue McClanahan has dealt with both diseases. McClanahan began her career acting in off-Broadway plays in 1957, and then debuted on Broadway in 1969. Next, McClanahan moved to soap operas. But she is best known for her roles as Maude's best friend Vivian Harmon on the 1970s show "Maude" and as the man-eating Blanche Devereaux on the 1980s show "The Golden Girls." McClanahan has continued to act in movies, TV shows and on the stage. She was also a devoted animal rights activist.

In 1997, McClanahan was diagnosed with breast cancer. She had a lumpectomy, followed by the removal of nine lymph nodes, five months of chemotherapy and six weeks of radiation. After making a full recovery, she began speaking at various breast-cancer-related events and sharing her experiences.

Twelve years later, McClanahan was preparing to attend a gala being held in her honor, but it had to be canceled when she was hospitalized. In a statement, she said that she was "currently having some maintenance on the old ticker." This translated to heart bypass surgery. Unfortunately, McClanahan suffered a stroke following the surgery and spent time in the ICU. Surgeons removed a blood clot, but the stroke caused some problems with speech and movement on the right side of her brain. McClanahan was reportedly doing well in her recovery and her health had started to gradually improve. However, Ms. McClanahan died of a cerebral hemorrhage on June 3, 2010. She was 76 years old.