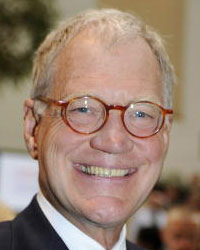 David Letterman at the opening of the Ronald O. Perelman Heart Institute in 2009
Statia Photography/Getty Images

David Letterman has been hosting his own late-night TV show for nearly 30 years. After college, Letterman worked as a radio talk show host and weatherman for a local station in Indianapolis. He moved to Los Angeles in 1975 and began writing jokes for other comedians as well as performing stand-up. Letterman also made appearances on numerous TV shows and game shows. In the late 1970s, he became a regular guest host on "The Tonight Show with Johnny Carson." Letterman got his own show, "Late Night with David Letterman," on NBC in 1982. In 1993, he moved to CBS with "The Late Show with David Letterman."

At age 51, Letterman had an angiogram that showed that he had coronary artery disease and he went on medication. Letterman also continued his exercise routine and eating a low-fat diet. In January 2000, however, another angiogram showed severe constriction. He immediately went into surgery for a quintuple heart bypass. After five weeks of recovery, Letterman returned to his hosting duties. His first guests included the team of doctors and nurses who had performed his surgery and taken care of him.

In 2009, Letterman helped to open the Ronald O. Perelman Heart Institute in New York City. Through his private foundation, the American Foundation for Courtesy and Grooming, he has donated to several heart-related charities such as the Larry King Cardiac Foundation. In 2010, Letterman celebrated the anniversary of his bypass surgery and brought his surgeon, Dr. O. Wayne Isom, on his show.