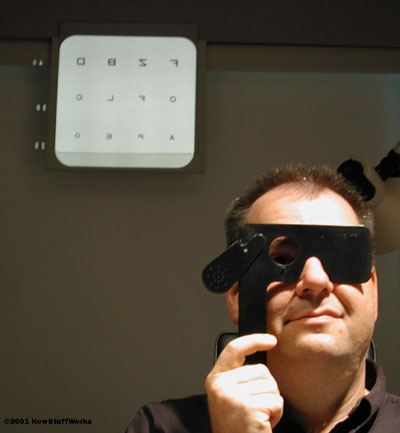 The change in my vision is phenomenal.

The most uncomfortable thing to me was wearing the eye shields. It was like wearing a Lone Ranger mask all day and all night. But all of the discomfort was forgotten the next morning when I woke up and looked around. I could see! I looked over at the digital clock on the night stand and could easily make out the numbers. I turned on the television and enjoyed watching the early morning news. Most importantly, my eyes did not hurt at all. No itchiness, swelling or even unusual dryness. I still used the drops just like Erika had told me to. There was a little redness from the suction device and my eyesight was still a little blurry. Also, I was just a little bit sensitive to light. Dr. Kelly had told me to expect that blurriness and sensitivity for a couple of weeks as my eyes completely healed.

The follow-up appointments were scheduled on a progressively lengthening basis:

Later in the afternoon of the day immediately after my surgery, I went back to Dr. Kelly for my first follow-up appointment. Erika gave me a vision test to see what my improvement was. She said that the average result for the first day after surgery is 20/50. My right eye was 20/25 and my left eye was 20/20, an amazing leap from the 20/400 that I had in both eyes the day before! Dr. Kelly then checked each eye to make sure that it was healing properly and gave me a clean bill of health.

My next appointment was a week after the surgery. Erika once again checked my eyesight. It had continued to improve over the week and was now 20/15, even better than normal! Erika quickly cautioned me that my vision could regress slightly over the next couple of months but should not regress beyond 20/20. Dr. Kelly once again checked my eyes and said that they were doing great.

At my one-month exam, Dr. Kelly informed me that my eyes seem to be completely healed with no side effects whatsoever. My vision has stabilized between 20/20 and 20/15. Life is good!

For more information on LASIK and related topics, check out the links below.

Special thanks to Dr. Michael Kelly and his assistant Erika Britt, as well as Bryan Lemon and Melissa Wood from LaserVision for their assistance in creating this article.