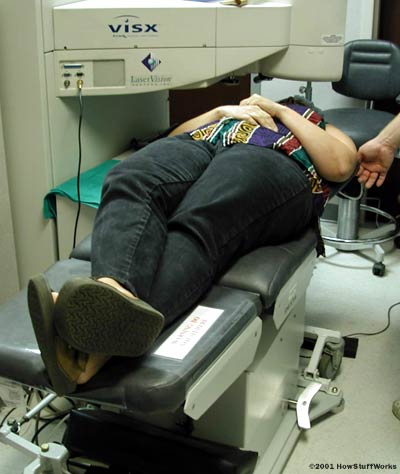 Lisa Wolf is preparing for the actual surgery. Like me, Lisa is nearsighted, with uncorrected vision of 20/400 in both eyes.

Once the eyes were prevented from closing, a shield was placed over my right eye. The laser was calibrated over the left eye. After the calibration was completed, Dr. Kelly made two tiny marks on my cornea to indicate proper alignment of the corneal flap when the flap is replaced. The corneal flap is created using a device called a microkeratome. Dr. Kelly used a small suction ring to hold my eye steady and quickly did the cut with the microkeratome. The microkeratome fitted onto the suction ring and sliced through the top part of the cornea to create a small flap that could be folded out of the way and then put back in place after the laser was done.

As soon as Dr. Kelly had folded the corneal flap out of the way, I was told to focus on the red light above me. Then the laser was activated and the procedure carried out while I watched the flashing red light.

Tools of the trade

The laser was pulsed for 17 seconds. Although it was a very brief period, it seems much longer when you are lying there and trying not to move. Once the laser was done, Dr. Kelly replaced the corneal flap and administered a small amount of antibiotic to the edge of the flap. The cool thing about the cornea is that it begins to heal and rebond immediately, so there is typically no need for stitches or any other agent to hold the flap in place.

The procedure is quick and painless. Lisa told me several weeks after her surgery that her vision had stabilized at 20/20.

As soon as the left eye was done, the shield was removed from my right eye and placed over the left one. Then the surgery was repeated for the right eye. The entire procedure happened very quickly, taking less than 15 minutes from the moment that I entered the operating room until I was done. There was no pain at all. However, there was a certain amount of discomfort. This was mainly due to the fact that someone else was touching my eyes, leaving me with a nearly uncontrollable urge to pull away or close my eyes. It was a good thing that my eyes were taped open.