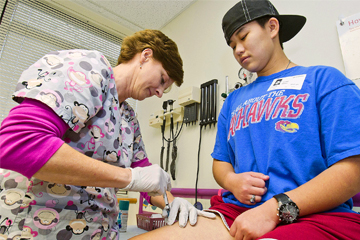 Hormone replacement therapy ignites some major changes for the body that can be really validating for a trans person.
Kansas City Star/Getty Images

Hormone replacement therapy (HRT), also called cross-sex hormones, is a way for transgender individuals to feel and look more like the gender they identify with, and so it's a major step in gender reassignment. In order to be eligible for hormone therapy, participants must be at least 18 years old (though sometimes, younger adolescents are allowed to take hormone blockers to prohibit their naturally occurring puberty) and demonstrate to a mental health professional that they have realistic expectations of what the hormones will and won't do to their bodies. A letter from that mental health professional is required, per the standards of care established by WPATH.

Hormone therapy is used to balance a person's gender identity with their body's endocrine system. Male-to-female candidates begin by taking testosterone-blocking agents (or anti-androgens) along with female hormones such as estrogen and progesterone. This combination of hormones is designed to lead to breast growth, softer skin, less body hair and fewer erections. These hormones also change the body by redistributing body fat to areas where women tend to carry extra weight (such as around the hips) and by decreasing upper body strength. Female-to-male candidates begin taking testosterone, which will deepen the voice and may cause some hair loss or baldness. Testosterone will also cause the clitoris to enlarge and the person's sex drive to increase. Breasts may slightly shrink, while upper body strength will increase [source: WPATH].

It usually takes two continuous years of treatment to see the full results of hormone therapy. If a person were to stop taking the hormones, then some of these changes would reverse themselves. Hormone therapy is not without side effects — both men and women may experience an increased risk for cardiovascular disease, and they are also at risk for fertility problems. Some transgender people may choose to bank sperm or eggs if they wish to have children in the future.

Sometimes hormonal therapy is enough to make a person feel he or she belongs to the desired gender, so treatment stops here. Others may pursue surgical means as part of gender reassignment.