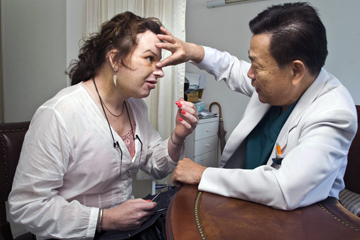 Some transgender women opt not only for gender reassignment surgery, but also for cosmetic procedures to feminize the face.
Yvan Cohen/Getty Images

Surgical options are usually considered after at least two years of hormonal therapy, and require two letters of approval by therapists or physicians. These surgeries may or may not be covered by health insurance in the U.S. — often only those that are considered medically necessary to treat gender dysphoria are covered, and they can be expensive. Gender reassignment costs vary based on each person's needs and desires; expenses often range between $7,000 and $50,000 (in 2014), although costs may be much greater depending upon the type (gender reconstructive surgeries versus cosmetic procedures) and number of surgeries as well as where in the world they are performed [source: AP].

One of the first surgeries male-to-female candidates pursue is breast augmentation, if HRT doesn't enlarge their breasts to their satisfaction. Though breast augmentations are a common procedure for cisgender women (those who identify with the gender they were assigned at birth), care must be taken when operating on a biologically male body, as there are structural differences, like body size, that may affect the outcome.

The surgical options to change male genitalia include orchiectomy (removal of the testicles), penile inversion vaginoplasty (creation of a vagina from the penis), clitoroplasty (creation of a clitoris from the glans of the penis) and labiaplasty (creation of labia from the skin of the scrotum) [source: Nguyen]. The new vagina, clitoris and labia are typically constructed from the existing penile tissue. Essentially, after the testicles and the inner tissue of the penis is removed and the urethra is shortened, the skin of the penis is turned inside out and fashioned into the external labia and the internal vagina. A clitoris is created from excess erectile tissue, while the glans ends up at the opposite end of the vagina; these two sensitive areas usually mean that orgasm is possible once gender reassignment is complete. Male-to-female gender reconstructive surgery typically takes about four or five hours [source: University of Michigan]. The major complication from this surgery is collapse of the new vaginal cavity, so after surgery, patients may have to use dilating devices.

Trans women may also choose to undergo cosmetic surgeries to further enhance their femininity. Procedures commonly included with feminization are: blepharoplasty (eyelid surgery); cheek augmentation; chin augmentation; facelift; forehead and brow lift with brow bone reduction and hair line advance; liposuction; rhinoplasty; chondrolargynoplasty or tracheal shave (to reduce the appearance of the Adam's apple); and upper lip shortening [source: The Philadelphia Center for Transgender Surgery]. Trans women may pursue these surgeries with any cosmetic plastic surgeon, but as with breast augmentation, a doctor experienced with this unique situation is preferred. One last surgical option is voice modification surgery, which changes the pitch of the voice (alternatively, there is speech therapy and voice training, as well as training DVDs and audio recordings that promise the same thing).