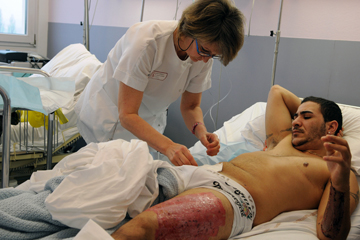 The most widespread surgery for transgender men is the mastectomy (or removal of breast tissue), but sometimes genital reassignment surgery can be a viable option as well.
Media for Medical/Getty Images

As with male-to-female transition, female-to-male candidates may begin with breast surgery, although for trans men this comes in the form of a mastectomy. This may be the only surgery that trans men undergo in their reassignment, if only because the genital surgeries available are still far from perfect. Forty percent of trans men who undergo genital reconstructive surgeries experience complications including problems with urinary function, infection and fistulas [sources: Harrison, WPATH].

Female-to-male genital reconstructive surgeries include hysterectomy (removal of the uterus) and salpingo-oophorectomy (removal of the fallopian tubes and ovaries). Patients may then elect to have a metoidioplasty, which is a surgical enlargement of the clitoris so that it can serve as a sort of penis, or, more commonly, a phalloplasty. A phalloplasty includes the creation of a neo-phallus, clitoral transposition, glansplasty and scrotoplasty with prosthetic testicles inserted to complete the appearance.

As with trans women, trans men may elect for cosmetic surgery that will make them appear more masculine, though the options are slightly more limited; liposuction to reduce fat in areas in which cisgender women i tend to carry it is one of the most commonly performed cosmetic procedures.