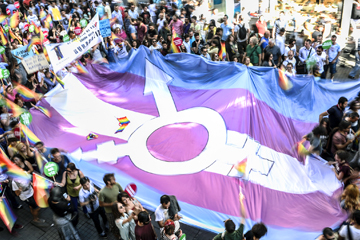 Though more transgender people are visible and living openly now than ever before, there are still many issues of violence and discrimination that continue to plague the community.
Bulent Kilic/Getty Images

As surgical techniques improve, complication rates have fallen too. For instance, long-term complication risks for male-to-female reconstructive surgeries have fallen below 1 percent. Despite any complications, though, the overwhelming majority of people who've undergone surgical reconstruction report they're satisfied with the results [source: Jarolím]. Other researchers have noted that people who complete their transition process show a marked improvement in mental health and a substantial decrease in substance abuse and depression. Compare these results to 2010 survey findings that revealed that 41 percent of transgender people in the U.S. attempted suicide, and you'll see that finally feeling comfortable in one's own skin can be an immensely positive experience [source: Moskowitz].

It's difficult, though, to paint a complete picture of what life is like after people transition to a new gender, as many people move to a new place for a fresh start after their transition is complete. For that reason, many researchers, doctors and therapists have lost track of former patients. For some people, that fresh start is essential to living their new lives to the fullest, while others have found that staying in the same job, the same marriage or the same city is just as rewarding and fulfilling and vital to their sense of acceptance.

In many ways, the process of gender affirmation is ongoing. Even after the surgeries and therapies are complete, people will still have to deal with these discrimination issues. Transgender people are often at high risk for hate crimes. Regular follow-ups will be necessary to maintain both physical and mental health, and many people continue to struggle with self-acceptance and self-esteem after struggling with themselves for so long. Still, as more people learn about gender reassignment, it seems possible that that these issues of stigma and discrimination won't be so prevalent.

As many as 91 percent Americans are familiar with the term "transgender" and 76 percent can correctly define it; 89 percent agree that transgender people deserve the same rights, privileges and protections as those who are cisgender [source: Public Religion Research Institute]. But that's not to say that everything becomes completely easy once a person transitions to his or her desired gender.

Depending upon where you live, non-discrimination laws may or may not cover transgender individuals, so it's completely possible to be fired from one's job or lose one's home due to gender expression. Some people have lost custody of their children after divorces and have been unable to get courts to recognize their parental rights. Historically, some marriages were challenged — consider, for example, what happens when a man who is married to a woman decides to become a woman; after the surgery, if the two people decide to remain married, it now appears to be a same-sex marriage, which is now legalized in the U.S. Some organizations and governments refuse to recognize a person's new gender unless genital reconstructive surgery has been performed, despite the fact that some people only pursue hormone therapy or breast surgery [sources: U.S. Office of Personnel Management, Glicksman].

It's interesting how our terminology changes throughout the years, isn't it? (And in some cases for the better.) What we used to call a sex change operation is now gender realignment surgery. Transsexual is now largely replaced with transgender. And with good reason, I think. Knowing that sex, sexuality and gender aren't interchangeable terms, updating "sex change" to "gender reassignment" or "gender affirmation" and "transsexual" to "transgender" moves the focus away from what sounds like something to do with sexual orientation to one that is a more accurate designation.