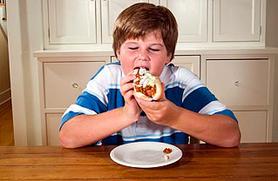 Did your child's unhealthy diet cause ADHD?
D. Anschutz/Thinkstock/DCL

It's scary to think that over 5 million children in this country are diagnosed with attention deficit hyperactivity disorder (ADHD) and of those children, 3 million are medicated each year. ADHD is a problem with inattentiveness, over-activity, impulsivity, or a combination. It's the most commonly diagnosed disease among kids, in fact between 3 and 5 percent of kids are said to have it.

Many parents are hesitant to medicate their children because the side effects of medications like Ritalin can be quite drastic. From a lack of appetite to the inability to sleep, and in some cases, depression, the downside is real. The idea of having such a huge population of young children medicated like never before in any society in itself seems downright frightening. And a new study published in the Lancet and reported on Civil Eats, sheds some light on what many of us have been thinking for a while. It's the medication that we take three times a day that can really make a difference and that medication is our diet.

The study's lead author Dr. Lidy Pelsser of the ADHD Research Centre in the Netherlands said this to NPR:

"Food is the main cause of ADHD." The study found that in 64 percent of children with ADHD, the symptoms were caused by food. "It's a hypersensitivity reaction to food."

This is good news for parents, especially when you hear the long term impact that Ritalin can have on some kids. Civil Eat's Kristin Wartman, pointed to one study published in the Journal of the American Academy of Child and Adolescent Psychiatry in 2007 that said "[a]fter three years on Ritalin, children were about an inch shorter and 4.4 pounds lighter than their peers."

Foods that Cause ADHD

Kids are showing both a sensitivity to foods themselves and food additives. The Feingold Diet proposed in the 1970s outlined particular foods to cut from a child's diet like artificial coloring, artificial flavors, added preservatives, Salicylates (a pesticide added to some food plants), and other food additives like sulfites, artificial sweeteners, MSG, and others. This really just points to a diet free of processed foods and rich in organic plant-based foods like fruits, vegetables, nuts, and beans.

Caffeine and processed sugar have also been known to be culprits. Flaxseed oil, on the other hand, has shown signs of correcting some of the negative behaviors associated with ADHD, just by mixing it with some of your kid's favorite foods. This is because omega 3 fatty acids are critical to healthy brain development as shown in this study on ADHD and related neurodevelopmental disorders.

What's the Difference Between Enabling and Supporting?
Repeat Hits in Football As Bad As Those Causing Concussions, New Study Finds
Being a Night Owl Can Shorten Your Life