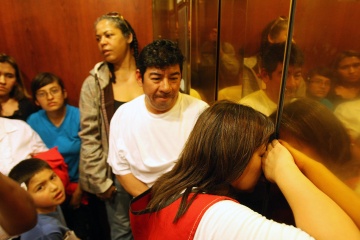 A woman tries to breathe fresh air through a crack in the doors when homeowners and Association of Community Organizations for Reform Now (ACORN) activists became stuck in a California elevator on March 25, 2009.
David McNew/Getty Images

It was October 1999, and Nicholas White, who was working late at Businessweek magazine, wanted a cigarette. Instead, he got a 41-hour claustrophobic nightmare trapped inside an elevator.

White did as we all would do in such circumstances, especially if we didn't have our ever-present smartphones (and maybe even if we did). He pressed the alarm and intercom buttons -- a lot -- and waited for someone to respond [source: Paumgarten]. Ultimately, he became discouraged when no one did. More than a day-and-a-half later, White was rescued. Although physically unharmed, White became loathe to step inside another elevator [source: Frank].

Suffering the vagaries of a malfunctioning lift can happen to anyone. Heck in 2011, an elderly nun survived four days locked inside the elevator at her Baltimore convent while her sisters were off at a convention. Luckily, she happened to be carrying with her some carrot sticks, water and a few cough drops [source: Daily Beast].

Being trapped in an elevator can be mind-numbing torture. Our pulse rate quickens. Our blood pressure rises. We sweat. We contemplate our life. We think about death. Sometimes we cry. Other times we panic. Some are lucky, others are not.

Many things can shake a person's psyche, and becoming trapped in an elevator arguably tops the list. Even the fear of being trapped is enough to cause panic in some people.

The horror elevators engender is real.

In December 2011, Suzanne Hart, 41, a New York City advertising executive, stepped into an elevator on Madison Avenue. Shockingly, the door closed on Hart and grabbed hold of her. Suddenly, like some sort of maniacal Transformer, the elevator turned monster, began its ascent and dragged Hart up the shaft, killing her and injuring two others [source: Donaldson].

Such tales chill our bones. Yet, they are rare. According to the Consumer Product Safety Commission, there were 22,674 elevator (and other lift) injuries in 2012. (For comparison, lawn mowers tallied up 83,573 injuries.) Of that number, 20,597 people needed treatment, while 2,077 had to be admitted to the hospital [sources: CPSC, Kaplan, Felton].

Moreover, 27 people die on average each year in elevator accidents. Still, with U.S. elevators making about 18 billion passenger trips each year, the fatality rate is a minuscule 0.00000015 percent per trip. Most of those deaths occur when people work or repair elevators [sources: CPSC, Kaplan, Felton]. In fact, if you live in the United States, you have a greater chance of being struck and killed by lightning than dying in an elevator accident, and both are highly unlikely [sources: National Geographic, NBC News].

Those who design and build the elevators say most accidents result from human error, not mechanical failure. Heck, some people injure themselves when climbing out of a stuck car. In fact, elevator professionals say riding in an elevator is 10 times safer than riding an escalator [source: Paumgarten]. Yet, people fear elevators fires, elevator decapitations and a litany of other problems. Yes, elevators cause anxiety in many people, who don't like to ride in them, or even wait for them.

Experts estimate that 200 people were killed in elevators when the World Trade Center collapsed on Sept. 11, 2001. Although there's no way to be sure, some undoubtedly died when the elevators fell to the ground. Others perished by fire, smoke, and eventually, the collapse of the structures [source: Paumgarten].

Although no one keeps statistics on how many people fear elevators, doctors say for those that do, their fight-or-flight response is all messed up. The fight-or-flight response, of course, is the body's way of dealing with fear. It's triggered by biochemical reactions, including the release of hormones that cause our body to change. When that happens, we might lose our voices, our limbs might shake and our heart rate might increase.

Elevator phobia is a form of claustrophobia, the fear of being trapped. About 5 percent of the population globally suffers from this condition, which is an anxiety disorder [source: Villines]. Those who have elevator phobia not only fear that the elevator will malfunction, but they also fear having a panic attack. Their fight-or-flight response goes helter-skelter. They sweat. Their heart rate increases. Their blood pressure sharply increases. Some hyperventilate. Others suffer dry mouth. People faint or feel as if they need to vomit. The list of symptoms is almost endless [source: Medical News Today].

Some scientists say that claustrophobia is genetic. They propose that our brains have evolved to perceive being in a confined space as dangerous. As a result, the brain has developed a special fear of closed-in places to keep us safe. Others say claustrophobia is a learned behavior, stemming from a previous experience such as being trapped in an elevator or locked in a small room or closet [source: Villines]. Agoraphobics, who often experience panic attacks, also do not like elevators. Agoraphobics fear any place where escape is difficult.

In Nicholas White's case, he didn't suffer from any phobia, although when he was a boy, he and some other children were trapped in an elevator for 20 minutes. He asked the firefighters who rescued him what would happen if the cables snapped [sources: Paumgarten, McHugh and Brady, Frank]. Nevertheless, some people are so afraid of elevators that they not only avoid the machines, but even refuse job offers if they entail riding on one to an office.

Elevator phobias are hard to treat, according to The Anxiety and Phobia Treatment Center at White Plains Hospital, in White Plains, New York. To that end, some psychologists recommend cognitive-behavioral therapy. CBT offers a way to desensitize patients by exposing them to their fear until that fear dissipates. One way to do this is to lock the patient in a black box the size of a phone booth for varying lengths of time until he or she overcomes that fear [sources: Paumgarten, Neuman].

For those who don't want to go the CBT route, the experts say there are things you can do to occupy your mind if panic sets in on an elevator. You can snap a rubber band on your wrist; try to distinguish which key on your keychain is which by feeling them in your pocket; or count the tiles on the floor or elevator wall. Before you know it, you're where you want to be. Up or down -- the choice is yours [source: Druckerman].

About 25 million Americans suffer from some type of phobia, while 2 percent have situational-specific phobias, such as being trapped in an elevator [source: James].

I have a few issues, but riding in an elevator is not one of them. Bridges are my kryptonite. I white-knuckle it all the way across. I've been on some major bridges and always think the road will collapse. If the fall didn't kill me, I'd sink like a stone. I often drive over the Tappan Zee Bridge that spans the Hudson River in New York. I've also stressed over the god-awful Newport Bridge in Rhode Island over spectacular Narragansett Bay; the Sunshine Skyway Bridge rising above Tampa Bay; and of course, the George Washington Bridge where I've been stuck in traffic many times. It's not fun. Bridges make me sweat. My hands tighten up. I always end up blasting the music, but never "Bridge Over Troubled Water." As I said, I have issues.

Why are people afraid of clowns?
Thalassophobia: Do You Fear the Deep Ocean?
Does everyone have claustrophobia?

Thalassophobia: Do You Fear the Deep Ocean?
Got a Backup Plan? Think About Ditching It
When It Comes to Lying, the Nose Knows