by Kate Kershner Mar 6, 2017
It pays to live near an abundance of trees and birds. Ryan McVay/Photodisc/Thinkstock

We know from viral videos that nature makes us happy. And science has provided plenty of evidence for the benefits of positive natural experiences, like walking in a nature reserve or hiking. For instance, lugging out the camping tent every weekend could allow for a better night's sleep, and feeding birds daily might help us relax. Studies have shown that interacting with nature can improve mood and attention, and promote well-being. But how do we ensure we're getting the benefits of nature when we live in an urban area?

Researchers in the United Kingdom conducted a study using dose-response modeling — a technique that measures, in this case, a dose of nature against a mental health response — to see what kind of neighborhood nature positively affects for depression, anxiety and stress. The 263 subjects in the study were from the same region in southern England and "cover[ed] a wide range of urban forms from dense housing to a planned green town," writes Daniel Cox, co-author of the study and research fellow at the University of Exeter, in an email. The subjects filled out two surveys: one with questions on their exposure to nature, and one rating their mental health.

What the researchers found was for the birds.

No, literally. They found that seeing more birds in the afternoon was associated with lower levels of anxiety, stress and depression. Cox says that the researchers "did not find a relationship with richness," meaning that it didn't really matter how many bird species there were, but how many individual birds participants saw. In other words, a group of bluebirds on your shoulder might just make you feel more "satisfactual" than one or none. (And you can just look at them. Don't try to wrangle a songbird.)

But birds weren't the only spirit lifters. The team also used aerial imaging and lidar (light detection and ranging) data to measure vegetation cover in the participants' neighborhoods. They concluded that  living near shrubs and trees could reduce instances of poor mental health, when vegetation cover reaches a certain threshold. "There are measurable decreases in depression, and stress if there is 20 percent vegetation or more around the home, and anxiety with 30 percent vegetation," says Cox.

While it might seem silly to measure how much green we're looking at to benefit our mental health, it could prove quite useful to urban planners or housing developers by helping them decide how to incorporate green space effectively. And, as Cox points out, it goes beyond your own small living area: "It's not just the nature in your garden but the nature you can see in your neighbors' gardens," he says. The verdant shrubs and trees next door might inspire a more chipper attitude in your home.

Related research by the same team goes even further, saying that if vegetation is managed to a minimum 15 percent cover, it could prevent cases of depression up to 5 percent. And the positive effects extend beyond mental health: The researchers found that visiting a garden once a week, or spending up to 30 minutes in one, enhanced perceptions of social cohesion among neighbors. On the other hand, people who spent less time outdoors were more likely to have worse physical behavior (level of physical activity).

So, if you're looking to feel good about your mind, your life or the people around you, take a (measured) shot of nature.

Now That's Interesting
Although the researchers also conducted a morning bird survey (an active time that gives a better idea of how many birds are in the neighborhood), they used an afternoon bird number that "provides a more accurate measure of the birds that people are likely to encounter and so gain benefits from," says Cox. 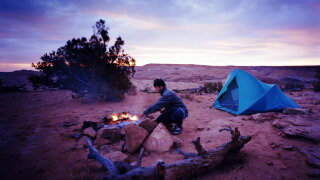 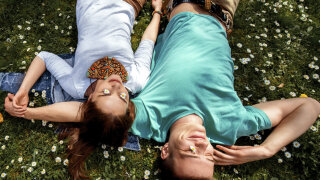 Can living off the land benefit your health?