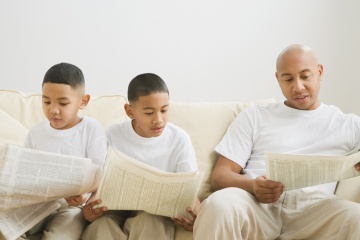 You may have some of the same habits as your parents, but are they based on influence or heredity?
Jose Luis Pelaez Inc/Thinkstock

Stuck with a bad habit you can't seem to shake? Blame your parents. Like your height and the color of your hair, habits are often influenced by those of Mom and Dad.

Take smoking, for example, a habit that nearly 70 percent of nicotine fiends would like to quit [source: Centers for Disease Control and Prevention]. A 2005 study conducted at the University of Washington found that 12 year olds with parents who smoke are more than twice as likely to pick up a daily smoking habit by age 21 than children of non-smokers [source: Bailey et al]. They're found to not try cigarettes once or twice, but actually develop a daily habit, one that's been proven tough to shake no matter what your age.

It makes sense that parents can influence kids' tobacco habits; after all, smoking is a very visual process. Kids see parents smoke throughout the day, accompany parents to the store to pick up cigarettes and smell the lingering smoke on clothing and in the air. But what about less visible habits like finances?

A study of twins found that genetics are responsible for 33 percent of the variation in savings rates. Even twins who grew up separately showed identical patterns of spending and saving [source: Cronqvist et al]. While social and environmental factors influence how you treat money, the influence of these factors declines over time, and by age 40, it's all down to genetics [source: Kadlec].

In a similar study, researchers found that your investment habits also come from your parents. Just like spending and saving, one-third of the variation in investment strategy is determined by genetics [source: Barnea et al]. Yet again, twins who grew up separately showed similar patterns of risk preference and asset allocation in the stock market.

Don't be discouraged if you find yourself stuck in the same rut as your parents habits-wise, while genetics explains some of the variation in habits like smoking and spending, it's not the only determining factor. With enough commitment, you may be able to overcome the influence of genetics and instill better habits for future generations.

Can I get cancer from one cigarette?
10 Little-known Facts About E-cigarettes
Does cheating run in the family?