Getting to Know the Injustice Collectors

by Julia Layton Dec 16, 2015
LAPD Chief Charlie Beck, right, talks to reporters on Feb. 7, 2013, about Christopher Jordan Dorner, a former LAPD officer who went on a shooting rampage and fits the profile of a violent injustice collector, as do Vester Flanagan and Elliot Rodger. Luis Sinco/Los Angeles Times via Getty Images

The morning of Aug. 26, 2015, Vester Lee Flanagan II (aka Bryce Williams) walked up to two TV journalists during a live news broadcast and shot them dead. Two hours later, while a manhunt was underway in Virginia, ABC News received a 23-page fax from the killer explaining why he did it.

None of it was his fault.

Black men and white women hated him. He'd been attacked because he was gay and black and driven to prostitution to solve his money problems. While working at the TV station that employed his murder victims, he'd been sexually harassed and bullied. He'd suffered racial discrimination. In 2013, when the station fired him unfairly, he'd had to brutally murder his pet cats.

Flanagan, who shot himself and died later that day, was outraged. Much of that outrage seemed directed at the TV station, and he'd murdered two employees of that station, so people understandably assumed the murders were an act of vengeance against his former employer.

That's incorrect, though, says Dave Cullen on New Republic. It was an act of vengeance against humanity.

Flanagan was an "injustice collector." It's a trait often associated with paranoia, narcissism and egocentrism.

Defining Injustice Collectors in the Wake of Columbine

Former FBI profiler Mary Ellen O'Toole, Ph.D., defines an injustice collector as someone who "nurses resentment over real or perceived injustices, and no matter how much time has passed ... will never forget or forgive those wrongs or the people he/she believes are responsible."

O'Toole coined and defined the phrase "injustice collector" in her 2000 FBI threat-assessment study after the 1999 Columbine High School massacre.

Injustice collectors obsessively keep track of every perceived wrong committed against them, maintaining enormous caches of grievances that go back years or decades. Many of those wrongs never actually happened. The ones that did are almost invariably trivial.

"His versions of events are often skewed, distorted, embellished or completely misinterpreted to the point of being absurd or ridiculous," writes O'Toole via email, "and many of the people on his lists probably have no idea what they did."

Flanagan complained when a co-worker brought watermelon to work for everyone to share, claiming it was a racial slur directed at him.

Injustice collectors are constantly adding to their lists — often literal lists, says O'Toole. They likely keep notes, legal records and other forms of documentation that help them keep track of their grievances and enemies.

Flanagan is one of many injustice collectors who have turned violent, a response foreshadowed by a history of aggressive, stunningly disproportionate responses to perceived harms. According to Cullen, Eric Harris, who along with Dylan Klebold killed 13 people at Columbine High School in 1999, was an injustice collector. So was Christopher Dorner, who killed four L.A. police officers in 2013, Elliot Rodger, who killed six people in Santa Barbara in 2014, and Andrew Kehoe, who killed 45 people in Michigan in 1927 when he blew up an elementary school.

Santa Barbara County Sheriff Bill Brown identifies then murder suspect Elliot Rodger (photo right) and some of the weapons he used, at a press conference in Goleta, California, on May 24, 2014.
ROBYN BECK/AFP/Getty Images

Injustice collectors may suffer depression, anxiety and despair, as well as loneliness and feelings of abandonment. They can't maintain relationships because they drive everyone away. Co-workers likely avoid them. Family members fear being added to the list.

The injustice collector is always the victim. Nothing is his or her fault. Ever.

Like many damaging human behaviors, injustice collecting is a pathological defense mechanism, a destructive way of coping with a troubling reality, especially one that threatens one's sense of self. Injustice collectors are often convinced of their own superiority and that they are entitled to success. That belief could come crashing down were they to take responsibility for personal shortcomings or failures. Instead, injustice collectors see themselves as helpless victims in their own lives.

"Why was I condemned to live a life of misery and worthlessness ...?" asks Santa Barbara mass murderer Elliot Rodger in his manifesto.

There are usually manifestos. It's how dangerous injustice collectors let the rest of us know we drove them to it.

Toward the end of Rodger's 137-page manuscript, an autobiography he refers to as a "story of a war against cruel injustice," he chillingly nails the dangerous injustice collector's perspective.

"I am the true victim in all of this," Rodger explains, "I am the good guy. Humanity struck at me first by condemning me to experience so much suffering. I didn't ask for this. ... I didn't start this war. ... But I will finish it by striking back. I will punish everyone."

Get a Sneak Peek at the James Webb Space Telescope 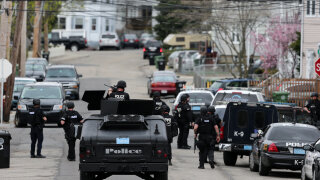 10 Biggest Manhunts of All Time