What the Use of Emojis and Emoticons Says About Our Personalities

by Alia Hoyt Feb 16, 2017
Do you love or loathe emojis? That may depend on your personality. yuoak/Getty Images

Good news for people who enjoy using emojis and emoticons, those little buttons or images that express an emotion on texts and social media. New research indicates that you're probably a pretty agreeable bunch!

The preponderance of emoji options has opened up a world of opportunity for psychologists to delve even deeper into understanding the human psyche, especially considering that more than 90 percent of people use emojis or emoticons in digital communications. Most recently, a group of researchers from Edge Hill University in England evaluated the link between emoji use and personality in two companion studies.

The first study aimed to examine how certain psychological considerations, like social anxiety, self-esteem and personality impact emoji use on text messages, Facebook and email. Participants self-reported emoji/emoticon use and personality characteristics. Then they provided data from Facebook accounts and spent 10 minutes interacting online with other participants. "Trait analysis revealed that agreeableness was positively related to self-reported emoticon usage on Facebook, but not in texts or emails," the researchers note in the paper.

The second study required participants to make personality judgments based on the Facebook pages of the other study members. "We have found that the amount of smiley emojis people use on Facebook, is related to other people judging them to be agreeable, conscientious and open to experience," says cyberpsychologist Linda Kaye, a co-author on both studies, in an email.

Certainly, emojis serve a valuable function. "Emojis are enabling us to communicate in ways that are in some ways, more similar to face-to-face conversation," Kaye explains. "That is, using emojis typically function as a way of expressing emotion which is often more difficult in written language communication."

In fact, appropriate emoji use could be thwarting hurt feelings all over the place. "It is certainly the case that people report using emojis are a way of establishing emotional tone and a consequence of this is that people state they believe that this reduces ambiguity in written communication," she adds. "There's some ongoing research to see whether or not this actually is the case."

According to the researchers, text, email and social media communications can actually wind up being less inflammatory than face-to-face conversations because we generally take more time to think before we type. "This therefore reveals that there may be unique underpinnings associated with emotional communication via emoji usage that may be inherently different from face-to-face expression," they write.

Although it might seem counterintuitive, the psychologists were able to surmise that people are more likely to accurately judge a person's level of "openness to experience" by visiting their Facebook page, than if they had a face-to-face conversation with them. In fact, they describe openness as "largely undetectable" in those critical one-on-one first impressions.  "Together these findings illustrate that there is clearly something unique about aspects of virtual behaviours that distinguish them from our traditional conceptualisations of human behavior," they note in the paper.

Whatever your emoji preferences, it's important to consider how you're using them, especially in professional or unfamiliar territory. "Emoji etiquette is difficult to establish as people use them in many different ways and diversely with different people, so there is not yet a social norm on what is acceptable or not," Kaye says. "However, I would advise that [you] only use them with another person if you know them personally." If it's someone you only know through online messages, then be sparing with emoji use, at least initially, she says. And be aware of how your message recipient responds. "If they don't seem to respond in the same way, then it may be worth avoiding emojis."

Now That’s Interesting
A lot of people use the terms "emoji" and "emoticon" interchangeably, but they’re not the same thing. Emojis are actual graphic representations (like a smiley face or a thumbs up), whereas emoticons are simple keyboard manipulations like :o) or ;o) if you’re feeling saucy.

Why Do Some People Hate the Sound of Chewing? Scientists Might Have the Answer

Men Use More Emoticons When Talking to Women 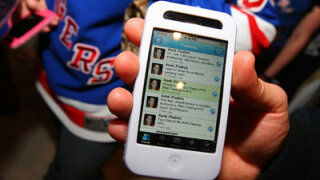 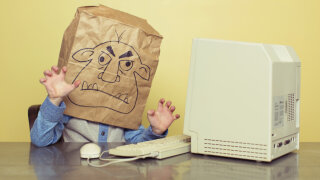