You Lose Most of Your Body Heat Through Your Head 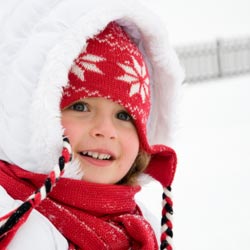 A hat will keep you warm, but is it more important than warm socks and gloves?
©iStockphoto.com/wojciech_gajda

You can trace this partial truth to experiments conducted in the Arctic by the United States military in the 1950s. Volunteers were adequately dressed from the shoulders down, but left bareheaded. Not surprisingly, that's where most of their body heat escaped -- up to 80 of percent of the body heat they lost, according to the earliest reports. The warning that you can lose 40 to 45 percent of your body heat from an exposed head became standard in the "U.S. Army Survival Manual." The reasons given are the lack of insulating fat and the proximity of the blood vessels to the surface.

Subsequent research conducted in Army labs qualify that claim. In a body at rest, 7 to 10 percent of heat loss occurs through the head. Engaging in work or exercise increases the body's core temperature and the flow of blood to the brain. So initially, you do lose more heat through the head -- up to 50 percent, similar to what the Survival Manual says. As the activity continues, however, the blood vessels near the skin in the rest of the body dilate, allowing more blood to flow throughout the body and reducing the flow to the brain. Meanwhile, the proximity of the vessels to the skin cools the blood to keep you from overheating. Heat loss through the head returns to about 7 percent.

It's still a good idea to cover the head in cold weather, of course, just like every other part of your body.