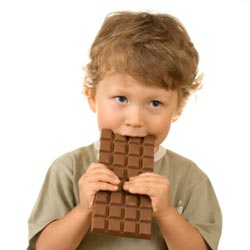 While the sugar in this chocolate bar won't make a kid hyper, the caffeine certainly could.
©iStockphoto.com/jaroon

Like some other myths on our list, this one has enough semblance of truth to sound legitimate. Simple sugars are pure calories (i.e., energy). They're quickly digested and sent to the bloodstream. So a rush of energy in the blood should cause a rush of activity in the body. The evidence often cited is the typical scenario of kids at a party. They binge on cake, cookies and sugary drinks, and then play games and generally wreak (mostly harmless) havoc. Ergo, sugar causes their behavior.

The science of sugar metabolism tells a different story, however. When sugars enter the bloodstream, they're first sent to the muscles and internal organs for immediate use. Excess sugars are not "worked off." They're stored in the liver and muscles as glycogen for later use. Anything over storage capacity winds up as fat. At the party, it's excitement that inspires the kids' rambunctiousness; sugar just fuels it. A bored child may snack on donuts or sugar-laden cereal and then watch TV or play video games quietly.

Sugary snacks and sodas are rightly blamed for their role in obesity and tooth decay. But hyper behavior is one rap you can't pin on them -- unless, of course, they're caffeinated products like cola or chocolate. More about caffeine up next.