Do women have a better sense of taste than men? 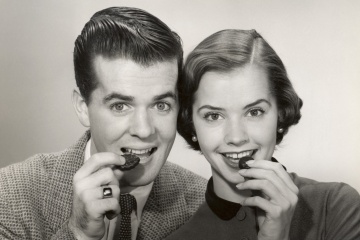 This woman probably thinks the cookie is a lot sweeter than the man does, thanks to taste dominance.
George Marks/Retrofile/Getty Images

Some women are pretty confident they have better taste than men when it comes to a lot of things, including fashion and decorating. But when it comes to the physical sense of taste, there's actually scientific evidence the female sex is superior. In studies, women were found to be better at determining the differences in tastes — and even better at describing how things taste. Women are also more likely than men to be supertasters [source: Bartoshuk et al].

This detail isn't lost on experts in taste testing. When the Nofima Sensory Laboratory in Norway recruits "super sensors" for its research, it's always all women who make it through to the final selection process [source: Korneliussen].

Taste dominance isn't just limited to adult females, though. Studies have found that girls also have a more acute sense of taste than boys. A recent Danish study assessed the senses of taste of secondary and primary school children by evaluating their food preferences and their abilities to differentiate between sweet and sour tastes.

In the end, it was determined that the girls were better at recognizing tastes than the boys. The study concluded that boys needed food to be at least 10 percent more sour or 20 percent sweeter to achieve the same taste-detection levels as the girls [source: University of Copenhagen]. A fascinating aside, however, is that the boys in the study preferred sweeter and more extreme flavors than did the girls.

So what is it that makes girls and women have a better sense of taste? There's still plenty of research being conducted on the topic, but the most basic answer is one that science has already discovered: Women typically have more taste areas (fungiform papillae) and taste buds on their tongues than men [source: Bartoshuk et al].

It's suspected that, from an evolutionary standpoint, women's tasting tools are more developed because the female sex has a more important role in protecting offspring — both during and after pregnancy. This may be why women also tend to have a stronger sense of smell than men.

Is Drinking Diet Soda Bad for You? 5 Health Risks
Does Love Make Your Pupils Dilate?
How Psychopaths Work

What causes 'old person' smell?
Why Can't You Taste Your Tongue?
Living in Racist Community Linked to Health Issues for Blacks, Whites Alike