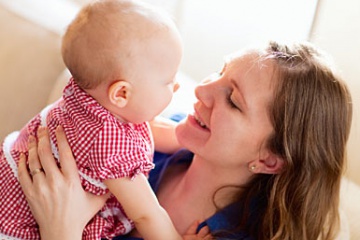 Find out what you should expect during your child's language development.
Hemera/Thinkstock

Babies are born programmed to learn language, and are actually quite adept at it. Their built-in language ability follows a universal timetable, one that transcends ethnicity and socioeconomic class. Here's an overview of what to listen for and when in your child's language development:

10 months: Pointing, grunting, and gazing to get her demands met; using her own invented words

12 months: Saying his first real words, such as Mama and Dada, a sibling's name, body parts, animal names, or noises like "woof, woof"

24 months: Speaking in two-word sentences, such as "Drink milk" or "Play ball"; using the words "no" and "mine" frequently

3 years: Speaking in longer sentences; putting several thoughts together to tell a story; using about 300 words; following a story line and remembering ideas from it; enjoying nonsense phrases

How Stuttering Works
Autism Language Difficulties
Alertness in the Womb

Why do lullabies work?
Baby Body Monitors Have Little Benefit for Healthy Infants, Say Experts
Rockabye Baby in a Smart Crib From Ford