Is mothering instinctive or learned? 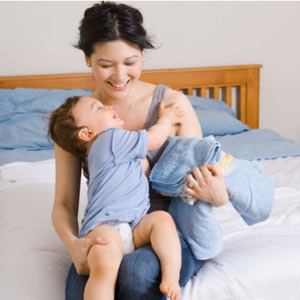 Whatever the agonizing or doubts, most mothers tenaciously persist in mothering. In fact, despite long hours at a distance because of work and other commitments, mothers today spend just as much time with their children as their mothers did.

Is this "more frenzied devotion" to children, as Ursinus University psychologist Catherine Chambliss calls it, compensation for being away — or simply the sacrifice and self-denial practiced by mothers of many species?

A bird, the North American killdeer, takes big chances. It entices predators away from the nest by pretending it has a broken wing — and sometimes loses its life. To protect their young, giraffe mothers have given their lives to lions, and in Africa, elephants, sensing a threat to their babies, have attacked jeeps. Mother octopi won't leave their eggs untended, thus going without food. Within a month, the mothers are dead, having made the ultimate sacrifice of self.

What makes females so motherly? Is it instinct — or learned? Some students of the topic lay blame not on evolutionary inheritance but on social conditioning. Leave It to Beaver set the standard in the 1960s. Movies such as Terms of Endearment and The Joy Luck Club continue to send the message that "mother" is just another synonym for "martyr."

Others favor biological explanations. Even virgins, it turns out, can be transformed into nurturers, given a dose of the right hormone. In experiments, oxytocin added to the fluid in the brains of female voles that had never given birth caused the critters — within only half an hour — to start caring for pups.

Rhesus monkeys lacking any experience at mothering also have been injected with the hormone. Result: They, too, behaved maternally toward unfamiliar infants. One intriguing study suggests a specific gene might be among the causes for a mother to become — or fail to become — an instinctive nurturer. The experiment, by Jennifer Brown and Michael Greenberg at Harvard Medical School, involved a new strain of mice.

The mice lacked a gene, fosB. Mothers without the gene neglected their pups, which died of cold and starvation. Everything else was working: The mice mothers had sufficient oxytocin. They were producing milk.

Another intriguing finding: fosB genes had the same effect in fathers. With the genes, male mice retrieved offspring that wandered off — but without the genes, the fathers let the little ones go.

A human female's tendency to "care" appears to begin early — among 2-year-olds, according to experiments by Carolyn Zahn-Waxler at the National Institute of Mental Health. In her studies, girls showed more sympathy than boys for crying babies. Boys would hold back. Girls would pat the babies on the head.

Why Do Men Have Nipples?
So What Are Men's Nipples For, Anyway?
A Guide to Pregnancy Complications

Grandparents' Child Care Habits Can Be Outdated, Potentially Harmful
'An Emerging Public Health Concern': Your Local Trampoline Park
What's the effect of children's exposure to actual violence as victims or as witnesses?