Can a woman get pregnant during her period? 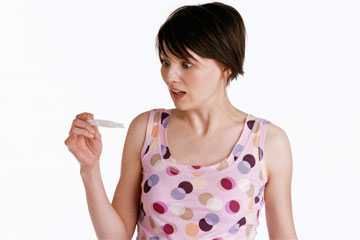 A scientific argument for why women can't get pregnant during their periods might go something like this: Since menstruation involves flushing an unfertilized egg out of the uterus, it doubles as a foolproof contraceptive window. But just as a baby's arrival isn't as simple as a stork dropping off a special delivery, getting pregnant involves plenty of intricacies and uncertainties. In fact, the menstrual cycle's variability is a primary reason why having a period doesn't temporarily render women infertile.

The typical menstrual cycle lasts 28 days, split into the follicular and luteal phases. In a nutshell, the follicular phase consists of a healthy egg developing in the ovaries, while the luteal phase is the post-ovulation preparatory period for that egg to meet up with a sperm in the fallopian tubes. A more detailed daily breakdown of how all of that happens within a single cycle goes as follows:

If, in those final days, a sperm never reaches the released egg, the menstrual cycle begins anew. Otherwise, the wheels are set in motion for pregnancy, and the hormone secretions associated with the luteal phase continue for the following nine months [source: Freudenrich]. However, those menstrual markers aren't identical for every woman, so even though it might appear impossible to get pregnant while on your period, it's plausible for an expectant egg and an enterprising sperm to meet at any point during the month [source: Shih].

How to Get Pregnant on a Period 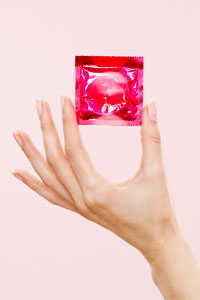 If a woman is hoping to get pregnant, it's commonly assumed that her best chance falls sometime around 14 days after her last period [source: Mayo Clinic]. But that rule of thumb only applies for those with a textbook 28-day menstrual cycle. More generally, women may reach peak fertility between 11 and 21 days after their periods, depending in part on the frequency and duration of their menstruation. Irregular periods that only come around every few months, as well as cycles shorter than the average 28 days may hold higher probabilities for overlap between ovulation and menstruation. Although the statistical chances of it happening are low, there are three main ways that it's possible to get pregnant from unprotected sex despite the presence of vaginal bleeding [source: American Pregnancy Association].

First up, if a woman has an especially short menstrual cycle, ovulation can occur before menstruation stops [source: Hirsch]. This is the least likely scenario for a period pregnancy to take place, but a longer period lasting up to seven or eight days combined with a compressed menstrual cycle can add up to an embryo. More commonly with shorter menstrual cycles, the ovaries could release an egg a few days after menstruation finishes. But even though an egg wasn't ready and waiting during the period itself, unprotected intercourse on, say, the last day of bleeding could leave behind sperm with a surprisingly potent shelf life. Sperm can survive inside a woman's body for three to five days, possibly resulting in pregnancy if the ovaries release an egg into the fallopian tubes in that time frame [source: American Pregnancy Association].

Vaginal bleeding can also be misleading, as it doesn't always signal menstruation. In fact, some women spot during ovulation, which could be mistaken for a light period [source: Barton]. In that case, unprotected sex could certainly result in pregnancy. And whether pregnancy prevention is a concern or not, having sex without a condom or other type of barrier method still puts partners at risk for contracting sexually transmitted diseases. Safe sex, in other words, is the smartest sex no matter what time of the month it is.

Since we're already dispelling the myth that you can't get pregnant on your period, why stop at just one contraception misconception? Some women mistakenly think that urinating after unprotected intercourse will flush any lingering sperm from their reproductive systems. That's anatomically impossible, however, since sperm enter through the vaginal opening whereas urine exits through the urethral opening between the clitoris and the vaginal opening [source: Kaiser Family Foundation].

As a woman, I've encountered the question of whether it's possible to get pregnant during a period many times. It's one of the most persistent pregnancy myths out there, and as such, I was happy to have the opportunity to bust it. Maybe one of the reasons that it still gets spread around as contraceptive fact is that, yes, it's statistically unlikely to get pregnant during a period. But it's still possible and doesn't negate the potential for contracting sexually transmitted diseases. After all, unplanned pregnancy isn't the only risk that goes along with sexual activity.

And the more myths out there that we can bust about how to have safe, smart sex, the better.