How a Baby Experiences Labor and Delivery 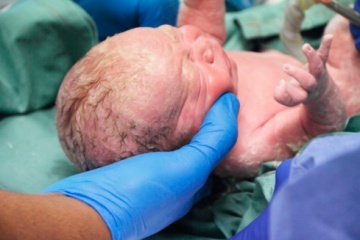 The bright lights and noise of a typical delivery room are a sudden change for newborns as they enter the world.
iStockphoto/Thinkstock

The fetus spends the final four to six weeks of pregnancy gaining weight in preparation for his entry into the world. The weight gain gives the baby "the energy stores to insulate birth, so the child doesn't get cold, and to have enough energy in the fat to survive the first day or two after birth until hunger occurs and the connection between sucking and no longer being hungry is made.

"Typically babies will lose up to 10 percent of their weight in the first couple of days after their birth. At that point they figure out that the pain in their bellies will go away if they suck," explains Dr. Joshua Copel, professor of obstetrics and gynecology and pediatrics at Yale University School of Medicine.

In the weeks just before delivery, the fetus often seems quieter. "It's almost as if there isn't enough space for the baby to wind up and take a real good whack at mom's bladder. Movements are still there, but they're not as large as when there's more amniotic fluid relative to the size of the baby earlier," says Dr. Copel.

The long, complicated process of labor and deliver is believed to be started by the baby herself. When the baby reaches full size she releases hormones that in turn trigger the release of a number of other hormones by the mother that cause the muscles of the uterus to contract. These same chemicals also slow the breathing movements of the fetal lungs, which carry amniotic fluid in and out, which had become regular earlier in the third trimester. During labor, the movements will cease almost completely, then start suddenly and energetically when the baby enters the world.

How does the baby experience the powerful contractions that mark labor? During contractions, "we know the pressure goes up to about 40 or 50 mm of mercury when we put pressure catheters into the uterus. But it's all around the baby. If you dive down to 100 feet, you don't feel any pressure as long as you're equilibrated. And the baby, being full of fluid, would be equilibrated. I don't know how to tell if there's discomfort for the baby, because it would be like diving down underwater," explains Dr. Copel.

See how the baby moves through the birth canal next.

Slipping Through the Birth Canal

In the last weeks of pregnancy, the baby typically moves into a vertex or head-down position, where he remains until birth. In the time of Hippocrates, the ancient Greek father of medicine, physicians believed that the fetus assumed this position so that he could kick off from the top of the uterus and push himself through the birth canal. Although the explanation is wrong, the fact is that the head-first delivery is best.

As labor continues and the baby descends into the birth canal, he turns his head. "The baby goes from typically looking sideways, toward one hip or the other, and rotates so that the back of the head is up and the baby is facing toward the mother's back," explains Dr. Copel.

As the mother pushes the baby out through the birth canal, the intrauterine pressure increases one last time. "Again, we don't know how the baby experiences that. I don't think Mother Nature intends to torture us. I don't think babies cry when they're born because they're in pain. I think it's a reflex that opens their lungs," says Dr. Copel. "Typically babies that are crying right after birth are just kind of making some noise — which has them breathing deeply and gets fluid out of their lungs."

They may also be adjusting to the sudden stimulation of light and sound after the relative soft lights and sweet music of the womb. "The difference between being in a 99.6 degree, fluid-filled, dark environment, and even a warm delivery room with lights and noise is so major that some of [the sleeping that they do right after birth] might just be reducing sensory stimulation until they get used to it," explains Dr. Copel. "If you shade most babies eyes immediately after birth, they'll open them and start looking around. They keep them scrunched up because it's like going from being in a really dark room to a really bright room for any of us. They've got a lot of adjusting to do."

Fear of a Three-parent Baby Stalls Treatment of Mitochondrial Diseases
How does maca root help fertility?
Guide to Being 11 Weeks Pregnant