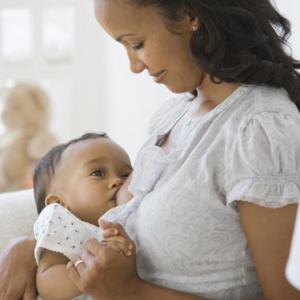 If you think breastfeeding is out of the question just because you're having multiples, think again. While the learning curve is undeniably sharper than bottle-feeding at first, experts suggest that you might ultimately find breastfeeding easier — fewer bottles to clean, no pricey formula to prepare, hands-free feeding (once you get really good). You can even feed your babies while you lie down and rest in bed, a great way to offer the skin-to-skin contact babies need.

And then, of course, there are the health benefits to your babies. "Prematurity is the No. 1 issue with multiples," says Catherine Watson Genna, IBCLC, a New York City-based international board-certified lactation consultant. "In many NICUs, doctors tell moms they need their breast milk as medicine for their babies, even if moms didn't plan on breastfeeding. That's because the death rate from infection in very small babies is so high." And the antibodies in breast milk help to ward off potentially harmful illnesses.

Since moms of multiples need double, triple or more than the average milk supply, it's important to start working at building yours right away, if breastfeeding is the route you choose. "Research shows that breastfeeding should begin immediately after birth. In cases where preemies are not ready to suck, Mom should start pumping within the first six hours, eight to 10 times a day for the first week or two with the goal of making 32 to 48 ounces of milk daily by the second week," says Genna. Use a hospital-grade, electric rental pump (which will allow you to efficiently pump both sides at once), and expect to spend about 20 minutes per session. One fringe benefit of pumping: It gives Mom a good reason to sit and rest.

If for some reason you don't start breastfeeding or pumping in the first few hours, all is not lost. But you are going to have to work harder to build your supply. That's because the body calibrates its milk supply around day two, and then fine-tunes the production process over the next couple of weeks. Says Genna, "This is the easiest time to increase milk supply. I recommend that moms who are trying, continue to pump up to two minutes after the last drop."

Newborns generally nurse about every two hours, so if you're exclusively pumping it's ideal to keep this same schedule (during waking hours). The biggest hiccup for moms of preemies is that it's nearly impossible to get to the breast pump every two hours when you're running to the hospital to visit your babies in the NICU. Genna's tip: "Pumping doesn't have to be spaced out evenly to be effective." To fit in those eight to 10 sessions a day, cluster your pumping sessions when you can (every 45 minutes to an hour and a half), just enough to make up for the time you need to be away.

"I strongly urge moms of multiples to touch base with a lactation expert while they're still pregnant so they can get set up for success, make arrangements for the best pump, and find somebody they can relate to and call on once the babies arrive," Genna says.

Maureen Doolan Boyle, a mother of triplets and executive director of MOST (Mothers of Supertwins) Inc., an international support network for families of multiples, says that if you're going to be successful at breastfeeding you need to have realistic expectations from the start. "Most moms aren't told that it's extremely unlikely to be able to breastfeed two babies at once until the babies have accurate rooting or neck control. The result is that moms immediately become frustrated and feel like a failure because the woman pictured in the breastfeeding book looks so happy."

Boyle adds that in the beginning, moms have to learn each baby's breastfeeding subtleties. For this reason, she says, "it's exceptionally important for moms with babies in the NICU to have the opportunity to nurse each child individually for two days before they're discharged."

Another consideration: Whether you'll be bottle-feeding or breastfeeding, you're probably not going to be able to feed your babies on your own right away. Unless you're half-octopus, you'll need someone to help you:

Finally, if you think you're going to give breastfeeding a go, treat yourself now to a large, firm, slanted nursing pillow specifically designed for twins so that once you get the first baby positioned you'll have your hands available to take on a second child. Between catalogs, the Internet and major retailers, you'll be able to find an array of baby gear designed for multiples.

The most important thing about positioning babies for breastfeeding is to give them good support, says Genna. "I like to keep newborns close to Mom's trunk. Don't lift the breast — bring the baby's chin to wherever the nipple naturally falls and have the nipple touch just above the baby's upper lip."

Since no two babies (not even identical twins) are exactly alike, experiment with different positions and note which one each baby prefers. Then, mix and match positions accordingly. You might also change positions occasionally just to give babies a different view. Here are two strategies that are especially popular for double feeding:

There's more than one reason to alternate which breast you offer each baby from feeding to feeding. For one thing, scientists think that switching breasts facilitates babies' normal hand/eye coordination. For another, if one baby is a stronger sucker, he can help bring in the milk supply evenly in both breasts. (Most moms can appreciate this, since the alternative can result in two different-sized breasts!)

What do you do when you have three (or more!) babies to breastfeed? Some moms of triplets will simultaneously give two babies the breast and one the bottle, alternating which baby gets the bottle. Other moms give the baby who is waiting a pacifier, and once the first two babies are satisfied Mom gives the third baby both breasts.

The bottom line is that breastfeeding can be challenging at first, whether it's one baby or more. And choosing to breastfeed is a personal decision that only Mom can make.

Can you breastfeed if you have MRSA?
Does breast-feeding make better babies?
Breastfeeding Overview