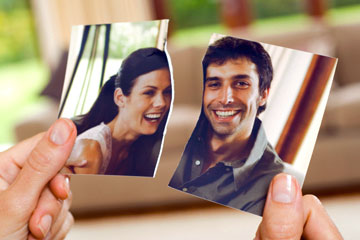 A break up should be handled in a mature way, with a minimum of pain.
Pixland/Thinkstock

If your relationship gives you more misery than pleasure and more pain than fun, sit down with a pencil and paper and figure out what you want and what you're willing to offer to get it. If you discover that there is nothing the other person can give (or anything you're willing to relinquish), then that should tell you something. Similarly, if you're in a relationship that used to work but has now turned rancid because one of you has moved or changed or cheated, you can't go back. However, you can evaluate if there is anything your partner can offer that has value to you and anything that you're willing to offer to get it. If so, get busy and figure it out and offer it. If not, it's time to do that grown-up thing and break up without bloodshed or nastiness.

The relationship isn't working for you. It really is the end. Breaking up is as important a skill as any other part of dating. It's not fair to just disappear without a word. The world's too small a place, and you're too big a person, so don't even think about it. Now the goal is to end it with the minimum blood loss, nastiness, and pain. When you finally decide to make the break, how do you actually go about doing it?

The first temptation to be avoided is the need to blame somebody or something. Because there are only the two of you, it's logical that you will decide, heroically of course, to make it all your fault, even though you know it's not true: "You're too good for someone like me," "I don't deserve you," — both of which mean you want out now. Or you could blame your partner: "You never loved me enough," "You cared more about your work than you did me," "You've never really gotten over your first love," "You've put on weight, lost hair, gotten moody..." Yada, yada, yada.

You don't need to fall into either trap. All you have to do to be dignified is to be specific about your feelings without laying blame. It doesn't matter in the long run whose fault it is, and avoiding blame spares you both a lot of pain.

To avoid the blame game, try saying, "I feel ..." rather than "You are ..." and no, it isn't okay to say, "I feel you're a rat." This approach is okay only if you follow up with something about yourself, like, "I feel neglected when you work weekend after weekend." (Of course, if you had been able to say this when you were feeling it, the relationship might not be beyond redemption at this point.) If you're specific now, at least both of you can look at the data as dispassionately as possible rather than feeling that either of you failed.

If the two of you are specific, you'll know what went wrong and what, perhaps, either of you could do differently next time. The why may be lost in the mists of time or be a proper subject for therapy, but when you're going your separate ways, getting stuck in the past feels incredibly painful. And the why is in the past, often clouded and sometimes unknowable. When you're reduced to asking why, you're both sunk, and there are no comforting reasons to be had.

Coping with a Break Up

Dealing with the aftermath

Now you're broken up. You've gone through the first hard part, the misery has ended, but another kind of misery is about to begin: the unhappiness of doubt, the "did I do the right thing" second-guessing. The aftermath of a breakup can be one huge pity party (allow yourself only 24 to 36 hours of tears) or it can be productive.

If this isn't your first breakup, take this opportunity to privately examine whether your relationships are following a pattern, beginning with your first love in second grade who hit you with the teeter-totter.

Looking for patterns is a really good thing to do for yourself because most people get involved again eventually (and, usually, much too soon, before they've sorted out the last disaster). You'll most likely want to get involved again, too, and knowing your patterns may help you avoid making the same mistakes.

Talking to your ex about the patterns you see in yourself isn't very productive. And puh-leeeze, under no circumstances, point out the patterns you see in your ex's behavior. You're not the parent or the therapist, and no matter how keen your insight, your remarks will be viewed as self-serving. So keep those pearls of "wisdom" for a hundred years from now when you're the best of friends, and even then, swallow them.

Just because a relationship doesn't last forever doesn't mean it's not good. Unfortunately, many of us feel that if it doesn't last as long as we wanted or expected it to, then somebody must be to blame, someone has to pay, and it wasn't a good relationship at all.

Remember that it takes a while to get to know someone, and even perfectly nice people can find that there's no chemistry after some time passes. Therefore, the relationship wasn't bad or a failure, and neither party has to be the bad guy or at fault. The only perspective by which you can evaluate if the relationship made any sense or was a good investment of your time is with time.

If you think of every experience as being tuition in the school of life and love, then you can understand that some tuition is higher than others, and some classes are more fun or stick with you longer, or teach you more than others. But it's only after time passes that you gain the perspective to see which things you really benefited from.

It is humanly impossible to go backward in a relationship. After you know that someone can be both kind and smart, you'll never settle for one without the other again. Therefore, every breakup is an opportunity to go forward, and, after a while, you may even be able to say thank you to the one who gave you your walking papers, even though it felt awful at the time.

Excerpted from Dating For Dummies™, published by Wiley Publishing Inc.

For more information on "Dating For Dummies®", or other books, visit Dummies.com.

Does Love Make Your Pupils Dilate?
What if he/she says 'I love you' too soon?
How to Introduce Your Girlfriend to Your Friends