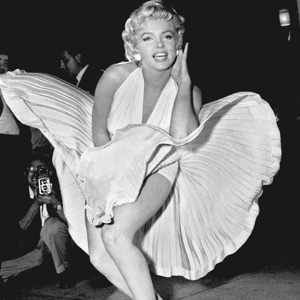 In 1955, Marilyn Monroe created cinematic history when she stepped on a subway grate. A gust of air from the train below lifted the bombshell's billowy white dress, which she coquettishly tried to keep in place. Decades later, that iconic scene from "The Seven Year Itch" is still being recreated or acknowledged in a host of films and television programs.

That famous scene isn't the only legacy of the film. The theory behind the title -- that a married person gets the urge to cheat or leave the marriage after seven years -- has become an ubiquitous term in marital counseling, women's magazines and popular culture. Before 1952, however, when "The Seven Year Itch" premiered on Broadway, someone complaining of a seven-year itch probably had an uncomfortable skin disease like poison ivy or scabies, not a relationship problem.

Writer George Axelrod heard the term "seven-year itch" from a comedian who specialized in jokes about hillbillies, farm animals and ugly girls. Regarding one particular unsightly girl, the comedian claimed that he could tell she was over the age of 21 because she'd had the seven-year itch four times. Axelrod didn't think it was a particularly funny line -- he called it "hideous" to writer William Safire in 1992 -- but it was stuck in his head when he was searching for a title for his play about a man considering an affair while his wife was away [source: Safire]. Before Axelrod settled on that title, the main character had been married 10 years, not seven.

But seven had a better ring to it than 10, so Axelrod changed the script. The main character encounters the idea of the seven-year itch when he proofreads a book by a psychiatrist who claims that a high percentage of men stray during their seventh year of marriage. In other words, we have a fictional psychiatrist, an American playwright and a hillbilly comedian to thank for the idea of the seven-year itch. The question is, did they accidentally stumble on a real phenomenon? Or is the idea that men stray at seven years just a lot of hot air -- the kind that blew up Marilyn's skirt?

To determine if there's something suspicious about the seventh year of marriage, researchers have turned to statistics about marital length and surveys about marital satisfaction. In the United States, the median duration of marriages that end is just over seven years, which would seem to support the idea of a seven-year itch.

But while seven years is a median marker for marriages in the United States, researchers have noted that a significant number of marriages in this country dissolve after just two, three or four years. A 2007 study found that couples who had been married less than three years were significantly happier than the ones that had been married between four and six years [source: Roberts]. In 1999, researcher Lawrence Kurdek found that there were two major declines in a 10-year marriage -- one at seven or eight years, which appeared to be further proof of a seven-year itch, but another one at year four [source: Berger]. Year four, Kurdek hypothesized, might be the point at which the honeymoon effect had waned, giving way to boredom with the relationship.

Anthropologist Helen Fisher has a different theory as to why the four-year mark is significant. Historically, she claims, humans gave birth every four years. We were driven, therefore, to couple up for four years -- enough time to have a child and raise it through infancy. After that, according to Fisher, men and women might have a biological drive to get bored with a relationship and seek a new partner for childbearing. By having children with more than one person, parents could increase the genetic diversity in their offspring, which increased the chances that at least one of their children would survive [source: Fisher].

Fisher also notes that marrying for romance is a relatively new phenomenon, and that we live much longer today than we used to. Perhaps, as she and other researchers have speculated, we simply aren't meant to be together for this long a lifetime. But even the researchers who have produced the most dismal statistics about marital happiness say there's a positive takeaway: If you know that boredom is a downfall of relationships at various points, then you can take the steps necessary to keep romance alive and marital dullness away. Trying new things and exploring new places with your sweetheart may be the key to ensuring that there's no itch to scratch.

Until Seven Years Do Us Part

In 2007, Bavarian politician Gabriele Pauli garnered headlines by suggesting that German marriages should expire after seven years. If couples wanted to renew the marriage for another seven years, they could. Pauli argued that allowing marriages to expire would be better for the country than a high divorce rate [source: Boyes]. However, this proposal was met with criticism from Pauli's own party, the conservative Christian Social Union (CSU).

How to Have a Great Date on a Budget
How to Build Confidence Before a Date
Is it love or lust?