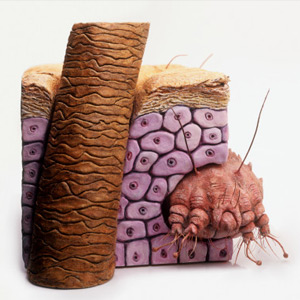 It's a scene straight out of a cheap horror movie: microscopic creatures crawling on your skin, eating your flesh and laying their eggs inside you. Although it sounds impossible, this is the reality for the countless number of people suffering from scabies. Even though scabies is usually considered a disease that affects people in unclean living conditions, it can be -- and is -- contracted by anyone, no matter how or where they live. In fact, according to the American Academy of Dermatology, there are an estimated 300 million yearly cases of scabies worldwide [source: American Academy of Dermatology].

Scabies has a number of myths surrounding its causes and treatment. Do you catch it from a dog or cat that carries the mites into your home, or is it a sexually transmitted disease? Can you treat scabies with natural home remedies, or should you run for the pharmacy as soon as you start showing symptoms? And what should you do about the terrible itching? In any case, you need to act as soon as possible -- scabies symptoms sometimes don't appear until two months after infestation, and the disease can continue to spread to different body parts and other people during that entire period [source: Mayo Clinic].

Many people are ashamed to admit that they have scabies because it is incorrectly associated with poor hygiene or sexual promiscuity. People often try to avoid the embarrassment of seeing a doctor by treating the mites in the comfort of their own home; this may not be safe or effective. Out of the countless home remedies listed on the Internet, most only help relieve the itching.

Even if you don't have them, it's important to educate yourself about scabies -- and to rid yourself of the stigma society attaches to them. People contract scabies in a variety of ways and exhibit some tell-tale symptoms. Read on to learn more.

Human scabies is caused by female scabies mites burrowing in the upper layer of human skin, and then laying eggs. Those eggs eventually hatch, and the process repeats itself, quickly multiplying into an infestation. The most common scabies symptoms include itching and skin rash, both associated with an allergic reaction to the mites and their feces. The itching associated with scabies is often severe and usually gets worse at night [source: Mayo Clinic]. These symptoms can affect nearly any part of the body, but are most often found on the wrist, elbow, armpit, penis, nipple, waist, buttocks and between the fingers [source: Centers for Disease Control and Prevention].

In addition to the itching and skin rash, some sufferers of scabies will develop scabies rash, which is a pimple-like breakout across the infected areas of the body. Occasionally, a person will be able to see the burrows created by female scabies mites digging underneath the skin. These appear as tiny raised and crooked lines across the skin's surface. Although uncommon, scratching the scabies can also lead to skin sores, which could eventually become infected with bacteria commonly found on the skin [source: Centers for Disease Control and Prevention].

Scabies symptoms don't develop for several weeks after infestation, and this delay often causes the symptoms to be more severe by the time they are treated.

Although they aren't as common, crusted scabies (also known as Norwegian scabies) are a severe form of the disease identified by thick crusts over the skin. These crusts contain high concentrations of mites. People who have crusted scabies may not have traditional symptoms of the disease -- itching or scabies rash. Crusted scabies usually occur in people who have a weakened immune system or a neurological problem. Additionally, the disease may occur in people who physically cannot itch (people with spinal cord injuries or paralysis to name a few) and therefore will not develop the traditional scabies symptoms. People suffering from this condition can be infested with as many as two million mites, and as a result, they are extremely contagious. They should seek medical care immediately [source: Centers for Disease Control and Prevention].

In the next section, you'll read about the different ways that humans contract scabies.

Pets Not a Problem

Dogs and cats can suffer from mites similar to scabies, but scabies is a human disease. Mites usually prefer a specific host animal, and they typically don't survive for very long away from the hosts. Because of this dependence, it is extremely uncommon for people to contract more than a temporary skin reaction from animal mites [source: Mayo Clinic].

When female scabies mites find their way to a human host and tunnel under the skin, it causes the itching and rash symptoms associated with scabies.

Scabies mites are spread by close, prolonged physical contact with a person who is already infected. The mites are most often spread among members of the same household who regularly come in contact with each other. Furthermore, scabies can spread by sharing articles of clothing, towels or even bedding with a contaminated person. In addition to sharing household materials, scabies can spread between sexual partners -- intercourse is one of the more common ways that adults contract and spread scabies [source: Centers for Disease Control and Prevention].

Because symptoms of scabies usually don't appear until several weeks after infestation, people often spread the mites to others during this period. This makes it difficult to prevent the spreading of scabies between people with increased levels of direct contact with others. This is why crowded institutions such as nursing homes, extended-care facilities and prisons are commonly the site of a scabies outbreak. However, it doesn't take large crowded buildings to pass the mites -- an entire family can become infested with scabies before anyone realizes there is a problem.

Furthermore, scabies symptoms are often misdiagnosed or ignored because they look like small pimples or mosquito bites. The mistaken diagnoses isn't corrected until several weeks later, when it becomes clear that the bumps are not pimples or mosquito bites but something else entirely. This delay can make scabies more difficult to treat [source: MedicineNet]. Speaking of treatment, read on to learn about scabies remedies.

Scabies are not the only parasitic mite that preys on humans. Chiggers, which live in forests, fields, parks, gardens and other grassy areas, usually latch on to clothing and migrate to the skin. Contrary to popular belief, they do not burrow into the skin and stay there; they remain at the top of the skin to feed. Once in place, chiggers insert their feeding parts into the skin, inject necrotic enzymes (enzymes that destroy tissue) and feed on the dead tissue. It's these enzymes that cause the incredibly itchy tell-tale red bumps that appear [source: Stoppler].

Once a person is diagnosed with scabies, there are quite a few techniques used for getting rid of the mites. A combination of remedies is typically used for the most effective results. If symptoms persist after two to four weeks, treatments are repeated to eliminate any remaining infestation.

The products used to treat scabies are called scabicides because they kill scabies mites. Certain scabicides can also kill mite eggs that haven't yet hatched. These products often come in the form of creams and lotions that are applied over the entire body for an extended period of time -- usually eight hours or more [source: Centers for Disease Control and Prevention].Though less popular, there are also oral scabicides for people who don't respond to the lotions or creams. Scabicides typically are recommended for everyone who shares regular skin contact with the contaminated person in case the mites have been passed on to them. Furthermore, this group treatment helps to prevent repeated infestation.

Although they won't eliminate the mites or eggs, there are a number of over-the-counter treatments to help relieve the intense itching of scabies. Topical creams, such as calamine lotion, are effective at relieving some of the less severe itching problems. Because the itching is caused by an allergic response to the scabies, doctors also suggest antihistamines to help control these symptoms [source: MayoClinic].

One of the best ways to treat scabies is to prevent it from spreading to others in a household. The moment a person begins showing symptoms, those who aren't yet contaminated can make sure to avoid direct skin contact with the infested person. Bedding, clothing, towels and any other fabric coming in contact with the skin should be machine washed and dried using the hottest possible setting or dry-cleaned [source: Centers for Disease Control and Prevention].

Keep reading to look at a few natural scabies treatments.

Treating scabies may seem like a difficult process for adults, but treating it in children poses additional challenges. Kids commonly get scabies in more exposed areas of the body, including the scalp, face, neck, palms of their hands and the soles of their feet [source: Mayo Clinic].

Although scabicides are most effective when treating scabies, all of them require a prescription. Furthermore, many of them are quite potent and can be hazardous if ingested. For people looking for a safe way to treat scabies without the help of a doctor, there are a few natural remedies that show promising results.

One of the commonly used natural treatments is a paste made from extracts of neem, a type of tree native to India. In one study, neem was found to cure 97 percent of the patients infested with scabies, and it is less toxic than the typical prescription scabicide is[source: The Health Guide]. Another home remedy is tea tree oil. Tea tree oil has been found to be effective against scabies mites in a number of studies, but it is harsh and should not be used undiluted [source: The Health Guide]. Another study compared the effectiveness of a typically prescribed lotion to an ointment created out of sulfur, a natural occurring chemical that has long been used for natural skin treatments. The study found that the sulfur ointment was just as effective for treating scabies in children [source: Singalavanija].

People suffering from the itching associated with scabies can try soaking their skin in cool water. A cold bath or cool damp washcloth can help relieve the itching. And, as mentioned previously, anti-itch creams such as calamine lotion or antihistamines can also alleviate itching [source: Mayo Clinic].

Even though it's difficult, you should not dwell on the negative connotations of scabies. Focus instead on treating and destroying the mites with traditional pharmaceutical creams or natural home remedies. The faster you treat them, the better you'll feel.

If you'd like to read more about the causes and treatments of scabies, visit the Web sites listed on the next page.

Scabies Does Not Equal Dirty

Scabies sufferers are often associated with negative stereotypes, such as poor hygiene. However, cleanliness has little to do with infestation: Mites underneath the outer layer of skin are resistant to water and soap and will continue to thrive even when a contaminated person bathes daily [source: Centers for Disease Control and Prevention].