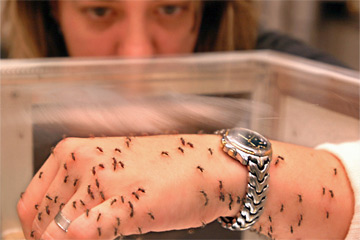 A graduate entomology student at the University of Florida bravely holds her hand in a cage of mosquitoes to see if they're ready to feed. Her research centers on why the insects are more attracted to some people.
AP Photo/University of Florida/IFAS/Tara Piasio

If you've spent much time outdoors, chances are you've had to fight with mosquitoes intent on making you a meal. Mosquitoes are more than just a nuisance. They transmit diseases like encephalitis, malaria and West Nile virus to hundreds of millions of people every year [source: CDC]. Add in the threat of catching Lyme disease from ticks, and it's easy to understand the importance of insect repellent.

Different insect repellents contain different active ingredients, some natural and some artificial, but all of them work in a similar way. Insects, particularly mosquitoes, are drawn to the carbon dioxide people release when they breathe, as well as certain odors from the skin. Insect repellent has the same effect on insects as bad cologne or perfume does on people -- avoidance. Interestingly enough, insect repellent doesn't actually harm insects, making it fundamentally different from pesticides.

So repellents don't harm insects, but can they harm you? For the most part, the answer is "no." The most popular repellents are registered with the U.S. Environmental Protection Agency (EPA), which tests their safety and effectiveness. The list of registered repellents is a short one, including the synthetic repellent DEET, as well as the natural repellents picaridin and oil of lemon eucalyptus, though you can find other repellents like citronella and IR3535 on the shelves.

While some of these repellents have undergone more testing than others, they all prove safe for the vast majority of people when used according to their safety guidelines. Yet insect repellents, by their very nature, work by spending hours in contact with the skin. Can these chemicals that insects abhor possibly be OK for your skin? Read on to find out.

How to Prevent Malaria
Are insect repellent and sunscreen a bad combination?
How can I take care of my skin while I'm backpacking?

Pediatricians Group Releases First-Ever Guidelines for Teens and Tattoos
What's angel dusting?
Should my esthetician do extractions on my face?