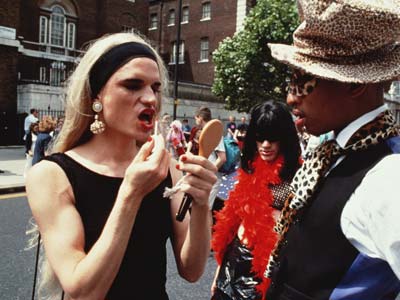 A man in drag applies lipstick at a lesbian and gay pride celebration in London, June 1995.
Steve Eason/Hulton Archive/Getty Images

The flapper era of the 1920s meant dark red lipstick, which remained one of the most popular shades for several decades. Max Factor invented lip gloss in the 1930s, giving clear, shiny, glossy lips their first taste of popularity. During World War II, essential lipstick ingredients like petroleum were unavailable, so lipstick was scarce. By the 1950s, however, dark red lips were back in fashion thanks to actresses like Marilyn Monroe and Elizabeth Taylor.

Lipstick colors really began to change in the 1960s, just as trends in clothes and other types of makeup changed. Rather than the deep colors of the 1950s, manufacturers began to market light, frosted lipsticks in colors like pale pink, lavender and even white that contrasted with the emphasis on dark, heavy eyes with thick, smudgy eyeliner and mascara.

­There was a move toward more natural lip colors in the late 1960s and early 1970s, but things got dramatic again with the punk movement of the late 1970s. The rebelliousness and nihilism of the era translated into dark purples and blacks. At the same time, androgynous glam rockers like David Bowie challenged cultural norms through the use of lipstick. There began an era of "manstick" (lipstick on men) as heavy metal bands such as Twisted Sister and new wave bands like Culture Club were fronted by men wearing full '80s makeup. Lipstick in the 1980s usually came in bright orange, coral, fuchsia and red, which went along with bright eye shadow, colored mascara and heavy blush. Frosted lips and sticky, sweet lip glosses also became popular.

Lipstick shades changed over the course of the 1990s. Initially, they were matte and dark, contrasting with lighter eyes and skin. Then in the mid-1990s, browns and other neutral tones were more popular. Glitter and frosted lips were seen more on younger women, as well as ravers and club kids. "Manstick" got a real boost when MAC Cosmetics named drag queen RuPaul as its first spokesmodel in 1995.

Today, a variety of lipstick colors, ranging from pale pastels to purplish blacks, can easily be found. Dark colors are generally more popular for evening (although goths wear them anytime), with neutrals and more subtle colors during the day. Another big trend is toward organic products, which use no chemicals or animal products and aren't tested on animals. According to some cosmetics forecasters, however, bright colors like pinks, reds and oranges are coming in response to the economic downtown as of March 2009. (Give What is the lipstick indicator? a read for more.)