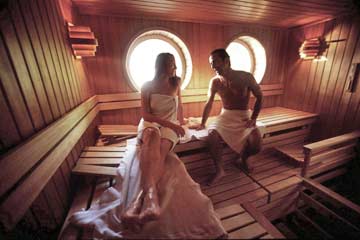 This couple opted to sauna toweled. However, it's worth noting that we have no idea how naked the photographer is.
Holde Schneider/Bongarts/Getty Images

If you've been following instructions, then you've read the previous six pages completely naked. If you're actually Finnish, there's a good chance you went the extra mile and read them on your iPhone whilst ladling water on the kiuas. But all this leads to the inevitable question: How naked do you need to be in the sauna?

Obviously, for a comfortable, effective sauna experience, you'll need to be as naked as possible. From there, everything breaks down into whatever the accepted local sauna culture happens to be. In Finland, for instance, you'll find both mixed-sex and single-sex nude saunas. But don't fret, bashful foreigners. No one is going to overreact if the shy American wishes to wear a towel. Hey, it's your loss for missing out on the sauna experience in its purest form, right? If you do go nude, however, all saunas will require you to sit on a towel.

Outside of Finland, gender divisions and nudity vary greatly. Germany, Austria, Scandinavia and Eastern Europe generally offer nude, mixed-company bathing. Russian banyas and South Korean jjimjilbangs are both traditionally gender-separated, but usually quite nude as well. Covering up with a towel is fine, but many establishments will frown on the wearing of shorts or even swimwear for hygienic reasons.

Other countries, such as France, Italy, Spain and the United Kingdom tend to offer same-sex facilities and are perfectly fine with nudity. Walk into a London sauna and you're likely to encounter a mixture of sauna cultures: stark-naked Scandinavians, towel-clad Brits and Americans snugly packed in their Speedos. Across the pond, however, you'll find a different scene. If you're planning to break a sweat in a U.S. sauna, then you're probably going to have to cover up.

Beyond the issue of nudity, also keep in mind that many cultures frown on talking in the sauna or bringing in outside items such as newspapers or a phone. Certainly, never try to smuggle a sandwich in with you. There's often additional etiquette surrounding when to pour water on the rocks, as well as when to enter or exit the sauna. In German-speaking countries, only the official saunameister may pour water on the rocks, and patrons are expected to enter and leave the sauna in strict 10-minute intervals. By all means, do not tempt the wrath of your saunameister.

Finally, it's always a good idea to pay attention to posted rules and follow the example set by sauna regulars. And whether you're sitting in your shorts at a Baltimore YMCA or experiencing a traditional savusauna nude in the taiga forests of northern Finland, remember to relax. Let the heat do its work and lose yourself in a cleansing rite as old as civilization itself.

Explore the links below to learn even more about saunas and skin care.