How dangerous are tanning beds? 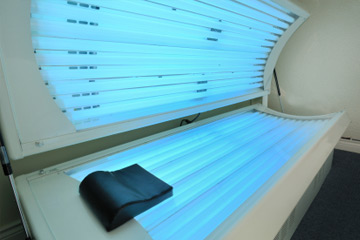 For years, scientists have been trying to knock down the myth of the "healthy glow" of a tan. And just when they were getting somewhere, some people began to believe that tanning beds were a healthier alternative. After all, the sun's ultraviolet rays are what's responsible for skin damage, and tanning beds don't involve the actual sun. It seems like a rational line of thought, but it's dangerously off base.

Experts have long agreed that no tan is good for you. And in recent years, they've suspected that tanning beds may actually be even more dangerous than the sun because they emit mostly UVA rays. This may cause more damage than the sun's standard UVA/UVB combination because UVA rays penetrate even deeper into the skin, causing lasting damage to important, fragile cells, including those in the immune system.

The suspicions of tanning beds were confirmed in July 2009 when a study by international cancer experts labeled tanning beds as dangerous as arsenic and mustard gas -- in the top category of cancer-causing risks [source: MSNBC]. The study -- which was a conglomerate analysis of 20 previous studies -- discovered that people who used tanning beds before their 30th birthday had a 75 percent higher risk of developing skin cancer. In addition, they discovered that all types of UV radiation - not only UVA rays - cause cell mutations and cancer.

Though tanning-salon advocates have argued that these studies don't correlate skin cancer with responsible, minimal use of tanning beds, skin cancer is on the rise among the young -- the typical users of tanning beds. Skin cancer used to be found most often in people well into their retirement years. However, melanoma -- the deadliest type of skin cancer -- has become Britain's most-diagnosed cancer for women in their 20s [source: MSNBC].

There's no doubt that tanning beds are dangerous. And by the looks of the latest studies, that danger may be deadly.

To learn more, visit the links on the following page.