What if I never took a bath? 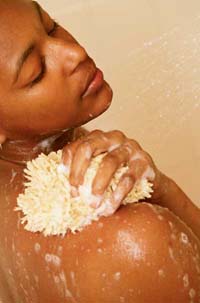 Your initial thought as you ponder this question might involve the word "gross." Beyond the immediate ramifications involving odors and a marked decline in social invitations from friends and family members, are concerns of a more serious nature -- the health variety.

Think about what's going to happen if you decide to stop bathing:

Consider what's going to get and remain dirty if you never bathe. The average human body is covered by about 20 square feet (2 square meters) of skin containing about 2.6 million sweat glands. In addition to sweat glands, your skin houses thousands of tiny hairs.

You are constantly sweating, even though you may not notice it. There are two kinds of sweat glands all over your body -- eccrine and apocrine. The sweat from apocrine glands contains proteins and fatty acids, which make it thick and give it a milky or yellowish color. This is why underarm stains in clothing appear yellowish. It turns out that sweat itself has no odor. Then why, you may ask, is a sweaty person so smelly? When the bacteria on your skin and hair metabolize the proteins and fatty acids, they produce an unpleasant odor.

An average person can sweat something like 1 to 3 liters per hour depending on the surrounding climate. Let's say you're sweating as much as 3 liters every hour. Because your skin, along with the hair all over your body, is sticky with sweat, it's probably picking up even more grunge than usual. Now we're just talking surface grime here -- regular old dirt. What about the other germs and microorganisms your skin regularly plays host to? For the most part, these bacteria, fungi and yeasts prove no major threat as long as they remain on the skin's surface. However, if they reach the bloodstream, that can be quite a different story.

There are a number of things that can make a person itch. Anyone can get chiggers or ringworm. Normally, this isn't such a big deal. Get some medicated ointment and you will be fine. B­ut if you're on a bathing hiatus and you're already quite itchy, either one of these conditions could send you into a scratching frenzy. You might scratch so much that you break your skin's surface. Now, let's say you have some serious bacteria hanging around in all that grime -- perhaps, staphylococcus. If it were to enter your bloodstream through the open scratches, the situation could even become fatal. The chances of this happening, though, are probably fairly small.

All of that aside, it's highly likely the stink factor is enough to send you scurrying for the soapsuds on a regular basis.

How do deodorants keep you from stinking?
How Body Odor Works
How Sweat Works