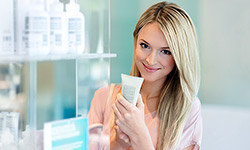 Caffeine is becoming a common ingredient in skin-firming lotions.
©Thinkstock

It helps us wake up in the morning and keeps us wide-eyed on long car trips: Caffeine, the ingredient that gives coffee, soda and chocolate its instant-energy kick, has been a favorite food additive of our sleep-deprived society for hundreds of years. In the past decade, however, caffeine has been popping up somewhere else surprising: in lotions and creams promising to reduce wrinkles, shrink fat cells and smooth away cellulite.

"Caffeine has been shown to constrict blood vessels," explains Cheryl Karcher, MD, a dermatologist in New York City. Because of this, she says, it's possible that applying caffeine-enhanced products to trouble spots may temporarily reduce swelling and contribute to the appearance of, say, a tighter tummy, skinnier thighs, or less puffy under-eye circles.

The ingredient also acts as a diuretic, dehydrating fat cells and making skin appear smoother, and a small amount of research does suggest it does work, at least in the short-term: A study in the Journal of Cosmetic Dermatology found that 76 percent of people who used a fat-burning cream containing caffeine and green saw their thigh circumference shrink, about an average of one-half inch. [Source: Fellingham]

However, Karcher cautions, these creams will not permanently reduce cellulite or even thigh circumference, and any changes you do see are likely to be very minimal. "If they do anything at all, it's going to be very, very temporary -- this is not a long-term solution by any means," she adds.

Caffeine also has antioxidant properties, and, in animal studies, has been shown to protect skin cells from cancer caused by the sun's ultraviolet radiation. [Source: Herman, Stallings] Interestingly, a 2012 Harvard University study also found that people who drink at least three cups of caffeinated coffee daily have a lower risk of skin cancer than those who drink less than one cup a month. [Source: Song]

Perhaps the best use for caffeine in skin-care products is to reduce dark, puffy circles under the eyes. If you have genetically thin skin, underlying blood vessels may show through as purplish blue markings -- especially when your body's under a lot of stress from lack of sleep. [Source: Guglielmetti] Eye creams containing caffeine helps shrink these blood vessels and makes them less visible -- and, because you're only applying a small amount to a very small area (as opposed to larger amounts on the belly or thighs), it's much more cost-effective, as well. Caffeine-infused face creams may also be worthwhile. Minimizing blood vessels can help the rest of the skin on your face by reducing redness and giving you naturally firm skin [Source: CBS News].

Is antibacterial soap any better than regular soap?
How does Roman Chamomile work in skin cleansers?
How to Cleanse Skin by Climate