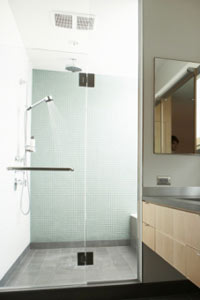 Before indoor plumbing and hot water heaters became commonplace in American homes, frequent bathing was a bit of an ordeal. Water had to be fetched and heated over a fire before a person could so much as dip a toe into the bathtub. The process was inconvenient (and still is in many developing nations), and all the members of a family generally used the same water to bathe and carry out other chores, like washing laundry, before it was tossed out.

We have Norwegian engineer Edwin Ruud to thank for inventing the home water heater in 1889. In Ruud's design, a switch ignited the gas heaters when a faucet was turned on in the house, producing hot water on demand [source: Ruud]. The same era saw the introduction of a slew of shower designs. A number of competing showers offered a variety of spray settings and directions, but most had unfortunate closed-system designs; the water that came from the showerhead went into the drain to be recirculated back up to the showerhead once more.

The advent of indoor plumbing would tie these inventions together. The Tremont in Boston became the first hotel in the world to feature indoor plumbing in 1829. Architect Isaiah Rogers would design the prototype for all indoor plumbing schemes to follow [source: Plumbing and Mechanical Magazine]. By the end of World War I, modern bathrooms were common in middle-class homes; by the 1930s, rural Americans had come to know the joy of daily showering [sources: McKendree, Reinhardt and Ganzel].

There's something luxurious about even a mundane morning shower. Anyone who's ever taken a warm shower at the end of a tough day knows the calming influence it exerts. Science backs up these bathers' collective anecdotal evidence. In fact, one Japanese study examined the prevalence of hormones found in saliva that serve as stress indicators. It showed a significant decrease in stress levels following bathing [source: Toda, et al].

Since we have indoor plumbing leading to showers that release hot water onto our stressed shoulders, it seems like a waste not to shower frequently. How much is too much, though, when it comes to the health of your skin? You likely shower every day, but is that more often than you should? 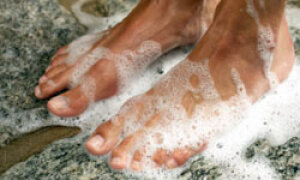