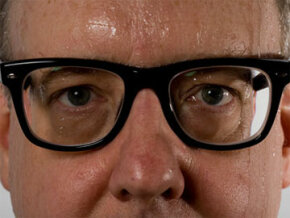 You are about to do something really big -- maybe ­a job interview, a presentation, a first date or your wedding -- and you notice that your palms and underarms are sweating. Perhaps, you've just completed an aerobic workout and your whole body is drenched in sweat. How can such different activities have the same effect on your body? What is sweat and why do we make it?

Perspiration, or sweat, is your body's way of cooling itself, whether that extra heat comes from hardworking muscles or from overstimulated nerves. In this article, we will examine your body's sweat glands, how sweat is made and what it does. You will learn that there is difference between the sweat on your palms and the sweat in your armpits and why your skin tastes salty after a workout!

The average person has 2.6 million sweat glands in their skin. Sweat glands are distributed over the entire body -- except for the lips, nipples and external genital organs. The sweat gland is in the layer of skin called the dermis along with other "equipment," such as nerve endings, hair follicles and so on.

See the next page to see how the sweat gland works. 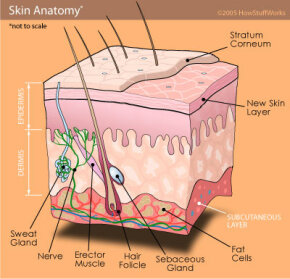 A cutaway diagram of a section of skin shows where sweat is produced in glands which lay coiled just beneath the surface.
HowStuffWorks 2005

Basically, the sweat gland is a long, coiled, hollow tube of cells. The coiled part in the dermis is where sweat is produced, and the long portion is a duct that connects the gland to the opening or pore on the skins's outer surface. Nerve cells from the sympathetic nervous system connect to the sweat glands. There are two types of sweat glands:

The two glands differ in size, the age that they become active and the composition of the sweat that they make. Compared to apocrine glands, eccrine glands:

In the next section, we'll find out how the glands produce sweat.

Did you know that the lining of your outer ear has modified apocrine glands called ceruminous glands? These modified sweat glands produce ear wax. Ear wax is thought to prevent foreign material from entering your ears, including insects.

How Sweat Is Made

We are constantly sweating, even though we may not notice it. Sweating is your body's major way of getting rid of excess body heat, which is produced by metabolism or working muscles. The amount of sweat produced depends upon our states of emotion and physical activity. Sweat can be made in response to nerve stimulation, hot air temperature, and/or exercise. First, let's concentrate on how sweat is made in an eccrine sweat gland.

When the sweat gland is stimulated, the cells secrete a fluid (primary secretion) that is similar to plasma -- that is, it is mostly water and it has high concentrations of sodium and chloride and a low concentration of potassium -- but without the proteins and fatty acids that are normally found in plasma. The source of this fluid is the spaces between the cells (interstitial spaces), which get the fluid from the blood vessels (capillaries) in the dermis. This fluid travels from the coiled portion up through the straight duct (Figure 2). What happens in the straight duct depends upon the rate of sweat production or flow:

Sweat is produced in apocrine sweat glands in the same way. However, the sweat from apocrine glands also contains proteins and fatty acids, which make it thicker and give it a milkier or yellowish color. This is why underarm stains in clothing appear yellowish. Sweat itself has no odor, but when bacteria on the skin and hair metabolize the proteins and fatty acids, they produce an unpleasant odor. This is why deodorants and anti-perspirants are applied to the underarms instead of the whole body.

The maximum volume of sweat that a person who is not adapted to a hot climate can produce is about one liter per hour. Amazingly, if you move to a hot climate such as the American desert southwest or the tropics, your ability to produce sweat will increase to about two to three liters per hour within about six weeks! This appears to be the maximum amount that you can produce.

In the next section, we'll learn about why we sweat.

When sweat evaporates from the surface of your skin, it removes excess heat and cools you. This is actually due to a neat principle in physics, which goes like this. To convert water from a liquid to a vapor, it takes a certain amount of heat called the heat of vaporization. This heat energy increases the speed of the water molecules so that they can escape into the air. For water, this value is 540 calories/gram or 2.26 x 106 joules/kilogram. So, if you can produce one liter of sweat, which is equal to 1000 g or 1 kg (density of water is 1 g/ml or 1 kg/l) in one hour, then 540,000 calories of heat can be removed from your body. This is an extreme example using the maximum amount of sweat that a person can make. Typically, all of the sweat does not evaporate, but rather runs off your skin. In addition, not all heat energy produced by the body is lost through sweat. Some is directly radiated from the skin to the air and some is lost through respiratory surfaces of the lungs.

A major factor that influences the rate of evaporation is the relative humidity of the air around you. If the air is humid, then it already has water vapor in it, probably near saturation, and cannot take any more. Therefore, sweat does not evaporate and cool your body as efficiently as when the air is dry.

Finally, when the water in the sweat evaporates, it leaves the salts (sodium, chloride and potassium) behind on your skin, which is why your skin tastes salty. The loss of excessive amounts of salt and water from your body can quickly dehydrate you, which can lead to circulatory problems, kidney failure and heat stroke. So, it is important to drink plenty of fluids when you exercise or are outside in high temperatures. Sports drinks contain some salts to replace those lost in the sweat.

As we mentioned earlier, sweating responds to your emotional state. So when you are nervous, anxious or afraid, there is an increase in sympathetic nerve activity in your body as well as an increase in epinephrine secretion from your adrenal gland. These substances act on your sweat glands, particularly those on the palms of your hand and your armpits, to make sweat. Thus, you feel a "cold" sweat. Also, the increased sympathetic nerve activity in the skin changes its electrical resistance, which is the basis of the galvanic skin response used in lie detector tests.

Excessive sweating -- usually on the palms of the hand or the armpits -- that is not caused by emotional or physical activity is called diaphoresis or hyperhidrosis. It is often an embarrassing condition. The cause or causes are unknown, but the condition may be due to the following:

This condition can be treated by medications and surgical procedures.

For more information on sweat and related topics, check out the links on the next page. 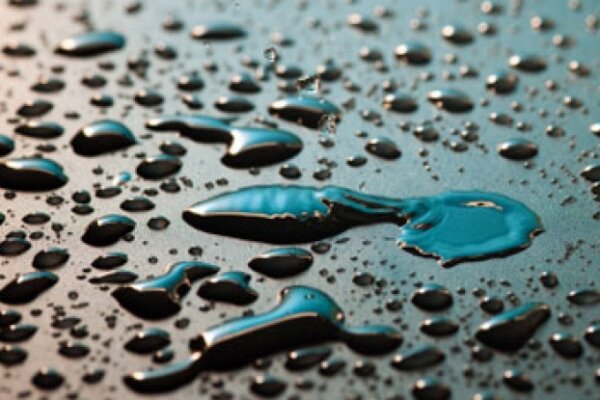 Up Next
Can your sweat be different colors?
Explore More 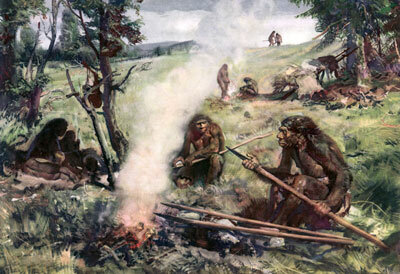