Are cloth diapers better for my baby's skin? 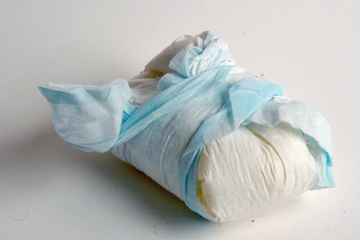 Disposable diapers are still in wide use, but many are considering cloth as an alternative.
© iStockphoto.com/Renphoto

So, you're contemplating going au natural -- so to speak -- with your baby's diapers but don't know if there's any benefit for your baby. The truth is: Maybe. Disposable diapers could be bad for your baby if he or she has an allergic reaction to something in the diaper. In that case, cloth diapers would be the way for you to go.

Cloth diapers don't contain chemicals that could lead to an allergic reaction. Disposable diapers, on the other hand, can cause a reaction if your child has a latex allergy. This occurs when chemicals used in the production of latex trigger your child's immune system. The body produces immunoglobulin antibodies in order to combat the latex [source: Mayo Clinic Staff]. Then the antibodies release histamine and other chemicals into the bloodstream, which can cause runny nose, itchy, watery eyes, diarrhea and hives. In extreme cases, latex allergy can lead to anaphylactic shock, which can be deadly. Antihistamine medications can stave off the reaction, though some parents aren't comfortable giving medication to their babies.

Another potential health concern is the absorbent materials used in disposable diapers. Sodium polyacrylate, the gel-like absorbent in the pad, was removed from use in tampons in 1985 due to its possible link to toxic shock syndrome, a rare life threatening bacterial infection [source: Citrinbaum].

Some disposable diapers have an absorbent center wrapped with a thin material called polyfilm [source: Gladwell]. The polyfilm is breathable, yet able to hold in moisture, while the absorbent core aids in keeping your baby dry. And while this chemical does a great job absorbing liquid, it cannot combat diaper rash all on its own. Prolonged exposure to excessive moisture will eventually trump the chemical's absorbing power and feces is no match for any diaper, disposable or cloth.

Diaper rash can occur regardless of whether you use cloth or disposable diapers. Diaper rash is most commonly caused by the skin rubbing against a wet diaper [source: WebMD]. Diaper rash can also be attributed to the acid and bacteria in urine and feces and can even be linked to cleaning wipes used when changing your baby's diaper. 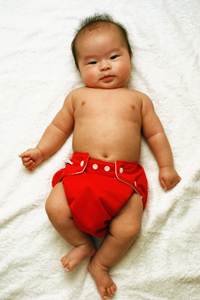 You can buy diaper covers to protect cloth diapers while your baby has them on.
© iStockphoto.com/samxmeg

Cloth diapers have one definite advantage: They're washable. That means you don't have to purchase as many, though you do have to make arrangements to wash them. It also means you have to store them until you're ready to wash them. But economically speaking, cloth diapers may be the best option. Let's do a little math.

If your baby uses five diapers a day, that's 1,825 per year. If your baby wears diapers for three years before he or she is potty trained, you can expect to go through more than 4,000 diapers (taking in account your child may not use as many diapers as he or she gets older). Now, let's look at the cost of disposable diapers. These numbers can vary based on where you find the best deals and the actual number of diapers you use. But a conservative approach to these estimates will give you a pretty good feel for the cost of disposable diapers.

You can buy a pack of 126 national-brand disposable diapers for about $37. That's roughly 30 cents per diaper. Multiply that by the conservative number of diapers (4,000) and you'll spend $1,200 for one baby's worth of diapers. That number may (and probably will) be higher due the varying costs of disposable diapers for different-sized children, and some estimates suggest you could spend as much as $2,000 [source: Consumer Reports]. Now, let's compare that to the cost of cloth diapers.

One cost-effective option for cloth diapers is the all-in-one diaper. These are one-piece diapers that combine an absorbent interior with a protective cover. Consider this though: A 5-pack of all-in-one diapers which can be used for newborns up to 12 months costs around $50 [source: Wal-Mart]. Now you would need probably 25 to 30 diapers to make it between washings so let's say you bought 30. That's $300. Even if you triple that amount (for three years of diaper wearing, and you'll need to buy larger diapers as your child grows) you still come out spending less money.

Diaper systems are similar except you buy both a moisture-resistant outer cover and diaper inserts. The covers can be purchased from retailers for $17 and inserts run anywhere from $16 to $20 for a 12-pack. The inserts are washable cotton. Again, applying the same math, you would spend $612 for covers and $48 to $60 for three dozen inserts. As you can see, that's less than $700.

One hidden cost to consider is the price of washing the diapers. Of course, you have to pay for the electricity, gas, detergent and water used to wash and dry cloth diapers, or you could hire a diaper service, if there's one in your area. If your child has sensitive skin, some specially formulated detergents are made specifically for babies but can cost more.

In the end, cloth diapers are probably more eco-friendly and more comfortable for your baby -- not to mention they're cheaper. But they can also be a pain in your and your baby's rear end. They aren't as absorbent as disposables, hastening a possible bout of diaper rash, and you have to keep them around the house in varying stages of smelliness until you wash them.

For more information on your baby's skin and related topics, visit the links in the next section.

Top 10 Foods for Beautiful Skin
The Sense of Touch
How does vitamin C benefit skin?