They're the most sensual part of the body that's out there for all the world to see. They're vulnerable and expressive. Good lips are crucial to sexual attractiveness.

Attractive lips look kissable and approachable, while thin or tight lips seem to suggest someone is prim or stern. For most women, the bigger and softer their lips are the better -- to a limit. Lips that look fake or that don't fit the face are turnoffs, the sign of bad surgery or poorly applied makeup. For men, it's a little tougher to define great lips, but the best ones manage to say, "I'm virile, but I have my tender side."

Men may make the best of what they have, but women labor for lovely lips. Ancient Egyptian women used henna to color theirs. In "Gone with the Wind," Southern belles bit their lips to redden them. The modern lip-coloring industry got its start in the silent-movie era, when such vampish stars as Theda Bara and Clara Bow plied bright-red lipstick. Today, wanna-be movie stars and ordinary women try lip augmentation -- injections or surgery.

Angelina Jolie's lips are the gold standard for many women getting plastic surgery.
Steve Granitz/WireImage/Getty Images

Wherever there's a buzz about lips today, the name of Hollywood star Angelina Jolie is sure to arise. In the popular media, her name is almost synonymous with beautiful lips. A British plastic surgeons' association has publicly bemoaned the problem of middle-age women demanding surgery to make them look like Angelina Jolie in a misguided notion that new lips will change their lives [source: Martin]. Last year, a survey of plastic surgeons in Beverly Hills found that Jolie's were the lips most sought after by patients [source: Elsworth]. And in the run-up to Oscar night 2009, a Beverly Hills surgeon reported that Angelina Jolie's were one of the two top pairs of lips desired by other actresses [source: MSN].

What is it about Angelina's lips that makes them so desirable? "Full," "sexy" and "bee-stung" are the adjectives that pop up most frequently in the lip-related media frenzy.

One sign of the fame of Angelina's lips: There are Web sites on which people devote a good deal of time and energy discussing whether they're real. Some even show baby and childhood pictures of girls identified as a full-lipped young Angelina to illustrate their theories [source: Examiner].

But wait -- we said Angelina Jolie's lips were one of the two top pairs of lips sought out by other actresses. Find out who her competition is on the next page.

Beyoncé may try to play down her lips when she's performing as her alter ego. But at the 2009 Academy Awards, she wasn't afraid to highlight her kisser.
Steve Granitz/WireImage/Getty Images

If they weren't hoping their lips would look like Angelina Jolie's, aspiring stars who visited plastic surgeons on the way to Oscar night probably were hoping to emulate Beyoncé Knowles, the singing star. Popular media outlets are full of descriptions of and praise for Beyoncé's lips. That's true even though her makeup artist has been quoted as saying that when Beyoncé glides into her alter ego, Sasha Fierce, for stage appearances, she's trying to "tone down" her lips with a neutral color to direct more attention to her eyes [source: Essence].

How to describe Beyoncé's lips? They are full and soft-looking, certainly as sexy as the rest of her. And that's part of their charm -- Beyoncé's voluptuous lips fit her image.

She may try to tone her lips down on stage, but Beyoncé's well-defined lips have won her a gig advertising L'Oreal lipstick in commercials. The Internet buzz on Beyoncé's lips tends to focus on whether she looks good in pink or mauve, or if red is more her thing.

The L'Oreal lipsticks are supposed to be long-lasting. Will the fame of Beyoncé's lips also have staying power? The next page will show you someone whose lips are sure to stand the test of time.

Men lining up for lip augmentation so they'll look like Mick Jagger? Hardly.

But if anybody's lips will have lasting fame, it's Sir Mick of the Rolling Stones. The pouty mouth with the big, expressive lips -- often described as "rubbery" -- was integral to his bad-boy, rebellious, hard-rocker image. The Stones were in the second wave of the British rock invasion, and shaggy haired, rubbery lipped, scrawny, rough Mick Jagger looked daring and dangerous when compared to the early Beatles with their cute haircuts, matching suits and choirboy features.

As if anyone would ever forget them, Mick Jagger's lips are now enshrined in the Victoria and Albert Museum in London. At an auction in September 2008, the museum paid $92,500 for the Rolling Stones' lips and tongue logo original artwork. The museum said that the design, created by John Pasche in 1970, "perfectly encapsulated Mick Jagger's sensuous lips and the band's rebelliousness." And David Barrie, the director of The Art Fund, Britain's No. 1 art charity, called it "one of the most visually dynamic and innovative logos ever created" [source: V&A]. Since the charity helped pay for the logo, you can bet Barrie wasn't just paying lip service to Sir Mick's rubbery lips.

Not all famous male lips are gigantic. Read on for another pair with staying power.

Elvis got a slight touch-up to his famous pout before his September appearance on "The Ed Sullivan Show" in 1956.
CBS Photo Archive/Getty Images

Ed Sullivan's TV show on Sunday nights was a family affair. Sullivan was so worried about Elvis Presley's reputation for sexuality that by Elvis' third appearance, in 1957, Sullivan allowed him to be shown only from the waist up. That meant the TV audience couldn't see Elvis' gyrating hips, but Sullivan couldn't do a thing about the King's sensuous lips.

Elvis' lips were as important to his romantic rebel image as were his bedroom eyes, the unruly shock of hair on his forehead or the drawl. Girls could almost feel what it would be like to kiss them, especially that full, soft-looking lower lip. Elvis' mouth was not especially large. But the way he used his lips was as important as how they looked. They quivered. They sneered. He emphasized the Cupid's bow shape of his upper lip, raising it to show his teeth at appropriate times.

It's no accident that Elvis' 28th movie, the 1968 film "Live a Little, Love a Little," was based on Dan Greenburg's novel "Kiss My Firm but Pliant Lips," which was even the film's original working title.

Even today, more than 30 years after his death, there are Elvis categories such as "best curled lip" in Elvis look-alike contests. There are also Web sites offering to teach people to draw Elvis caricatures, with detailed instructions for his distinctive lips.

Read about what may be the most famous pair of red lips ever on the next page.

Marilyn Monroe was famous for her rouged lips: Their making up required a complicated blend of colors and finishes.
Michael Ochs Archives/Getty Images

Marilyn Monroe knew how to make the most of her assets. She transformed herself from Norma Jean Baker, who grew up in foster homes and orphanages, into the world's most famous blonde movie star and unabashed sexpot. She bragged about wearing no underwear with her revealing clothes.

She used makeup to further her image of being overwhelmingly sexy but somehow innocent. Her strikingly light hair came out of a bottle. She had darkened, perfect eyebrows and a painted-on mole. And the lips -- Marilyn often made up her well-shaped lips herself, taking great care as she applied a blend of three shades of lipstick, and then covered it with Vaseline and wax [source: Fox]. And she knew how to use those shiny, flaming lips for a dazzling smile or a provocative pout.

Marilyn Monroe committed suicide in 1962, but her lips live on in art at the Smithsonian Institution's Hirshhorn Museum and Sculpture Garden in Washington. Andy Warhol, the pop artist, painted Marilyn many times after her death. Some of his works use vivid colors to emphasize her lips, and one immortal 1962 work of polymer, silkscreen ink and pencil on canvas is nothing but the image of Marilyn's disembodied lips, over and over. [source: Hirshhorn Museum]. The work is titled, aptly, "Marilyn Monroe's Lips," and it has been widely reproduced in posters and even on housewares. Yes, you can buy coasters and appetizer dishes featuring one of the world's most famous pairs of lips. 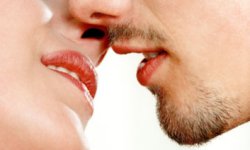 Got cold sores? Scroll through these photos to learn how to get rid of cold sores.